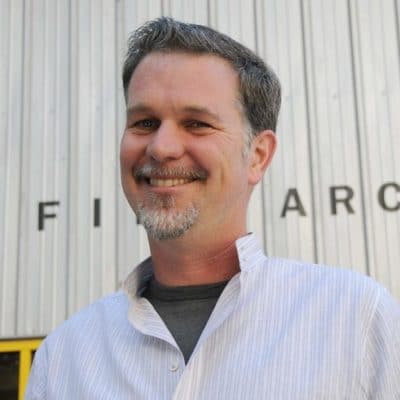 Top business speaker for hire Reed Hastings is an American entrepreneur and leading technological innovator best recognized as the co-founder and CEO of Netflix.

Since its inception in 1997, Netflix has become the world’s most popular video streaming service with over 86 million subscribers. As a globally-renowned keynote speaker for corporate events and industry conferences, Reed shares personal stories from his own entrepreneurial journey including his secrets on topics such as the future of innovation, building a positive company culture, driving employees forward to success and more.

A Boston native, Reed joined the Peace Corps. directly after college and taught high school math in Swaziland for several years before returning to the states to earn his masters in computer science from Standard University. Reed attributes some of the entrepreneurial spirit he developed from his time in the Peace Corps. claiming the real life experiences he had while traveling abroad made starting his own business seem a lot less intimidating.

His first job in the tech industry came with Adaptive Technology under New York tech titan Audrey MacLean where he worked on debugging software. In 1991, he left the company to start his own troubleshoot software business called Pure Software. The business thrived, but with the rapid growth came some growing pains for Hastings. He was an engineer by trade who was now CEO over 640 employees and it was during this time that he learned how to not only create a successful company but more importantly what it took to be a leader for his employees. In 1997, Reed left Pure Software after several mergers with other companies.

The idea for Netflix was born when Reed realized a video he had rented from a video store was weeks overdue. He had accrued quite the late fee and couldn’t find the cassette tape! Together with Marc Randolph, they created the first iteration of Netflix which was a simple single rental movie service via the mail. The allure of no due dates or late fees struck home with consumers and soon Netflix had garnered enough interest to build the company into a subscription-based service via the internet. The rest is history!

Reed has been praised for his progressive managerial practices including paying higher than normal salaries to attract the best talent and allowing employees the ability to arrange their vacation time off individually without limitations. He strives to create an environment in the workplace that is founded on freedom and responsibility. Outside of the office, Reed is an active educational philanthropist and served on the California State Board of Education from 2000 to 2004. He is currently on the board of several educational organizations including CCSA, Dreambox Learning, KIPP, and Pahara. He is also a board member of Facebook, and was on the board of Microsoft from 2007 to 2012.

Reed received a BA from Bowdoin College in 1983, and an MSCS in Artificial Intelligence from Stanford University in 1988. Between Bowdoin and Stanford, Reed served in the Peace Corps as a high school math teacher in Swaziland. Reed is married with two children.