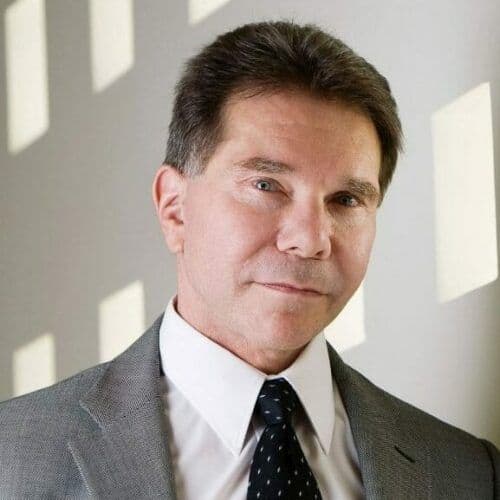 Dr. Robert Cialdini has spent his entire career conducting scientific research on what leads people to say “Yes” to requests. The results of his research, his ensuing articles, and New York Times bestselling books have earned him an acclaimed reputation as a respected scientist and engaging storyteller.

"Dr Cialdini was the top speaker we've ever had...in or out of the organization. They loved him."

"Dr Cialdini's ability to make the science of influence understandable and immediately usable is only exceeded by his contagious knowledge and passion for the subject."

"Our Fortune 1000 executive attendees embraced Dr. Cialdini's thought-provoking principles and scored him in the top percentile of speakers at the Alexander Group's Annual Chief Sales Executive Forum. That's significant given our discerning audience who set the bar consistently high!."

"Along with Malcolm Gladwell and Guy Kawasaki, Dr. Cialdini is one of the highest-rated speakers we have ever had."

"After Dr Cialdini's program, the noise of praise was almost deafening."

"He blew everybody away. They were thrilled. In fact, afterwards, one of our lead people pulled me aside and said he came into this program thinking he had been oversold about Dr Cialdini's effectiveness. He admitted he was wrong, and ended up taking 6 pages of notes on ways he can apply this information immediately to his work. And yes, you can quote me on this."

"If you have a choice, don't miss the opportunity to expose your people to this man. His work, his science, his ethics and his method for putting it all together are an experience you can't' get elsewhere."

"Over 350 managers could not get enough of Dr Cialdini's highly interesting lectures. After his last talk, he received a standing ovation, which is very rare in Holland. It was a sign of deep appreciation for his contribution to the success of the day."

His books, including Influence and Pre-Suasion, have sold more than five-million copies in 41 different languages.

Dr. Cialdini is known globally as the foundational expert in the science of influence and how to apply it ethically in business. His Six Principles of Persuasion have become a cornerstone for any organization serious about effectively increasing their influence.

As a keynote speaker, Dr. Cialdini has earned a world-wide reputation for his ability to translate the science into valuable and practical actions. His on-stage stories are described as dramatic and indelible. Because of all of this, he is frequently regarded as “The Godfather of Influence”.

Pre-Suasion: Opening the Door to Persuasion

The author of the legendary bestseller Influence, social psychologist Robert Cialdini shines a light on effective persuasion and reveals that the secret doesn’t lie in the message itself, but in the key moment before that message is delivered.

What separates ordinary communicators from truly successful persuaders? Using the same combination of rigorous scientific research and accessibility that made his Influence an iconic bestseller, Robert Cialdini explains how to capitalize on the essential window of time before you deliver an important message. This “privileged moment for change” prepares people to be receptive to a message before they experience it. Optimal persuasion is achieved only through optimal pre-suasion. In other words, to change “minds” a pre-suader must also change “states of mind.”

In this program, Dr. Cialdini draws on his extensive experience as the most cited social psychologist of our time to illustrate how the Pre-Suasion process works and how it can be used in your organization. He explains the techniques a person can implement, ethically, to become more influential both professionally and personally. Altering a listener’s attitudes, beliefs, or experiences isn’t necessary. All that’s required is for a communicator to redirect the audience’s focus of attention before a relevant action.

The Power Of Unity

With The Power of Unity, Robert Cialdini artfully braids science together with meaningful and moving personal accounts to produce a set of compelling lessons for business success.

This unique presentation explores what scientific research demonstrates about the ability of certain relationships to facilitate our goals. Dr. Cialdini skillfully interprets the implications of these relationships both inside and outside the organization.

Audience members learn the answers to such questions as: What can change rivals to make them want to work together? What can make seemingly unrelated, angry people bond together to accomplish meaningful goals? What can make a negotiation more satisfying and come to fruition faster? What simple statement can lead to Unity? What simple request can do the same? And, how can this be accomplished ethically and effectively in business settings? Dr. Cialdini explores and answers these questions and more in this unique program.

What constitutes Unity? The Power of Unity shows how to develop, engage, and focus relationships for optimal working success.

Since publishing multiple books on the topic, Dr. Robert Cialdini has been frequently asked to speak to audiences about the principles of persuasion that scientific research indicates are most likely to spur others to change. In those presentations, something has emerged that invariably captures audience attention to a remarkable degree: If, while describing one or another of these psychological principles, Dr. Cialdini says, “Now, I’m going to give you something really small that you can do to make this principle work in your behalf,” the room changes immediately. Bodies incline forward, faces lift to the stage, and pens hover above notepads.

It’s understandable. Audience members are responding to an attractive return-on-investment proposition. It’s one that’s likely to be of enormous value in their increasingly time-challenged, busy lives—a minor investment of time or energy that will lead to disproportionate returns in all sorts of daily arenas.

After all, to achieve most professional and personal goals, people need to be influential in their interactions with others; and reliable shortcuts in that pursuit are like found gold. In addition, these “small BIGs” are attractive because they require little expense or effort to implement—often involving nothing more than the change of a word or two in a communication—which makes them more likely (than big procedural changes) to be actually performed.

In this new presentation, Dr. Cialdini focuses on a set of small alterations that individuals can make to their persuasive attempts that research shows are likely to produce significant increases in their persuasive success. In the process, he illustrates the four forms that “small BIGs” can take: small adjustments to (1) words, (2) actions, (3) images, and (4) environments that can all produce outsized persuasive impact. Finally, he stresses how individuals can employ such adjustments not only effectively but ethically as well to ensure the cultivation and enhancement of long-term, mutually beneficial relationships.

What does scientific research tell us about the persuasive approaches that make people most likely to say yes to requests? How can we use this research ethically and effectively?

Dr. Robert Cialdini, author of the ground-breaking book, Influence, is your guide, translating the scientific research into practical business applications. His widely acclaimed studies are highly instructive to those who want to be more influential.

Here, Dr. Cialdini identifies and explains the six universal principles of persuasion that move others toward yes. Participants receive answers to such questions as:

What can we do to shorten the time required to develop and deepen relationships with our prospects, customers, and co-workers? How can we effectively establish our authority and trustworthiness with those we meet for the first time?

After we have given, what words can we use to increase dramatically the likelihood that we will receive in return? When others are sitting “on the fence”, which principles of persuasion are most likely to spur them to act? And, which is the most underused, yet effective, principle of persuasion? In this program, Dr. Cialdini answers all these questions and more.

Used correctly and ethically, these scientifically-tested principles produce lasting relationships and strong, long-term change. When the science is available, why use anything else?

Leadership Through The Power Of Persuasion

It is through the influence process that we lead, generate, and manage change. Like most things, the process can be handled poorly or well. It can be employed to foster growth and to move people away from negative choices and in more positive directions, thereby creating the conditions for new opportunities. Or, it can be used clumsily, reducing the chance for genuine movement and, in the worst of cases, boomeranging into conflict and resentment.

As such, it is important for those wishing to lead effectively to understand fully the workings of the influence process. Fortunately, a vast body of scientific evidence now exists on how, when, and why people say yes to influence attempts.

In his presentation, Dr Robert B. Cialdini extracts from this formidable body of work the six universal principles of influence–those that are so powerful that they generate desirable change in the widest range of circumstances. The principles are:

Dr. Cialdini’s presentation illustrates how these six principles have been and can be harnessed to meet specific influence objectives. Dr. Cialdini emphasizes the nonmanipulative use of the principles so that those who are influenced feel personally committed to the new direction and to their relationship with the leader.

Influence During Times Of Uncertainty

In today’s uncertain environment, the need for simultaneously effective and ethical influence is necessary, pertinent, and now more vital than ever to our success.  During this profound presentation, Dr. Robert Cialdini briefly reviews six research-based universal principles of influence, but focuses on those principles that are most effective during conditions of uncertainty and that leaders can employ to bring about positive and lasting change among individuals located both inside and outside their organizations.

Dr. Robert Cialdini, author of the ground-breaking book, Influence, and co-author of the New York Times best-seller, Yes! 50 Scientifically Proven Ways To Be Persuasive, is your guide in translating highly relevant but poorly-understood scientific research into practical business applications. His books have sold more than 2 million copies worldwide. Dr. Cialdini is the world’s leading authority on influence and his widely acclaimed studies are highly instructive to those who want to be more influential.

It is through the influence process that we generate and manage change. Like most things, the process can be handled poorly or well. It can be employed to foster growth and to move people away from negative choices and in more positive directions, thereby creating the conditions for new change opportunities. Or, it can be used clumsily, reducing the chance for genuine movement and, in the worst of cases, boomeranging into conflict and resentment.

In this presentation, Dr. Robert B. Cialdini first describes the six universal principles of influence—those that are so powerful that they generate desirable change in the widest range of circumstances. The principles are: Liking, Authority, Consensus, Scarcity, Reciprocation, and Consistency. Dr. Cialdini’s presentation next focuses on how the first three of these principles have been and can be harnessed to meet specific, mutually beneficial objectives by building trust.

Throughout, Dr. Cialdini emphasizes the ethical use of the principles so that those who are influenced feel personally committed to the change and come to trust (appropriately) that their advisor/partner will continue to counsel them correctly. It is only in this fashion that the influence process can be simultaneously effective, ethical, and enduring. And, it is only in this fashion that it can enhance a lasting sense of partnership between those involved in the exchange.