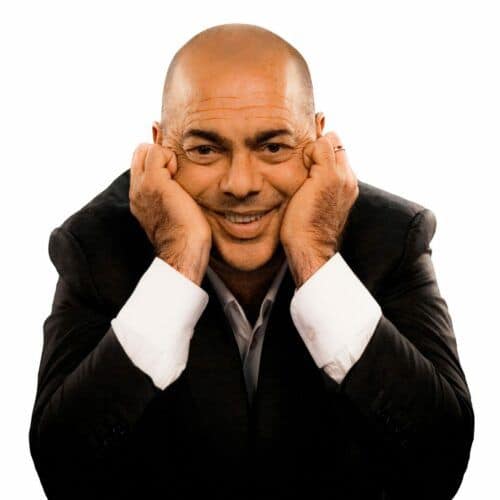 One of Europe’s most acknowledged futurists & renowned authority on innovation

Vito Di Bari shows organisations how emerging technologies will transform their businesses and how to beat the competition.

"Di Bari is a visionary who has the ability to understand where innovation is going."

"Vito Di Bari's keynote is the best I ever seen. He goes through the next business trends, the emerging technologies and how they will change the way we work and tells how to use this knowledge to compete in the business arena. The, the gran finale: Vito shows the future as it will be on big screen and comments it live with symphonic music in the background. The effect is spectacular, the audience is fascinated and inspired."

"He is the new European guru of innovation."

"Vito Di Bari was just superb! Not just because of how he delivered his interesting content and perspectives, but most of all for having achieved the engaged presence of the top echelon of the Executive Branch, the relevant ministers to the issue at hand, the highest level private sector representation and the Diplomatic and Consular Corps, for the full length of his dynamic talk."

"Vito Di Bari is a visionary on Innovation, a great leader and a fantastic speaker. He was a guest speaker with terrific impact."

The Innovation Designer for the World Expo 2015, Executive Director at United Nations’ UNESCO in Paris and Professor of Design and Management of Innovation at Polytechnic University of Milan, Di Bari is one of the most influential futurists in the world. He has published 11 books on innovation and hosted the show “Live from the Future” on the Discovery Channel.

Named Big Thinker 2014, Vito is considered by many to be the thought leader of the tech-driven design movement Neo-Futurism. The Financial Times defined him as “the Guru of Innovation and Design”; the Nobel Laureate for Economics, Kenneth Arrow said, “Vito Di Bari engineers dreams. Concrete dreams, based on solid facts”.

An inspirational speaker with a dash of humour who literally shows the future on stage, Vito’s keynotes combine depth of strategy with the magic of entertainment. Founded on a solid scientific approach, his presentations include the unveiling of new technologies and a detailed forecasting of medium-term business trends.

His background as United Nation’s IMI UNESCO Executive Director and university professor is harmoniously paired with his showmanship style to create memorable storytelling using custom films on theatrical screens, humour and the occasional coup de théâtre to demonstrate the future and illustrate to his audiences how their lives will change in the next 5 to 15 years.

Vito tailors his keynotes for every event, recounting the stories of evolution of individual business segments, uncovering the future way of working in those industries and unveiling the future competition in those markets.

Telling stories of the individuals responsible for pivotal moments throughout history while echoing the works of artists, writers and philosophers, all narrated as an enchanting tale of the never-ending challenge of human civilization with metaphors, paradoxes and a lot of humour.

Live interactions with the audience to sprinkle in extemporaneous brainstorming, blitz surveys, Q&A’s and even dancing. Add a dash of live tweets to and from the people in the room, tweeting infographics and receiving back comments in real time.

The Exponential Effect - How AI, 5G and IoT will relaunch productivity, markets and economy

Leading the transformation of the future - the world in 2025

A perfect motivational event for conventions of companies emerging and relaunching their business approach, launching new lines of product, targeting new markets. The future of business trends and business growth, innovation and leadership: a great inspirational talk for C-Level executives.

A journey into the future of marketing

Successfully premiered at EXMA, the emerging LATAM marketing platform, with over 6,000 attendees.  The future of business trends and business growth, innovation and leadership: a great inspirational talk for marketing executives and consultants.

A perfect inspirational moment for conventions of companies going through a transformation process, guided by leaders with a vision to share, launching new innovative lines of product, announcing a relevant evolution (such as a merger, acquisition, join venture, partnership), celebrating its anniversary. The future of technology, business and economy: a great inspirational talk for Associations, Entrepreneurs and C-Level Executives.

Welcome to the future of shopping

“Today we will learn how to win the business competition… from the animals, we will unveil an exponential retail trend, get back in time to forecast the future, receive seven postcards from 2025 and end with a time travel.” This is how Dr. Vito Di Bari, named one of the three most acclaimed futurists in the world, starts his keynote on the future of retail. A memorable and inspiring lecture, and a travel in time from the birth of retail to the present and over. With a grand finale: Vito will show the future of retail. Literally, with an exclusive short movie commented live on big screen.

This is much more than a keynote, it’s a multimedia feast of positive icons and smart solutions to increase the quality of life of the future dwellers.  The future of business trends and business growth, innovation and leadership: a great inspirational talk for the ones who will design and manage the cities of the future.

A journey into the future of hospitality

It’s the ultimate keynote to inspire C-Level in the hospitality business to embrace innovation and intercept the future through a radical transformation. Great for anniversaries and for teams and professionals in the conventions and events business.