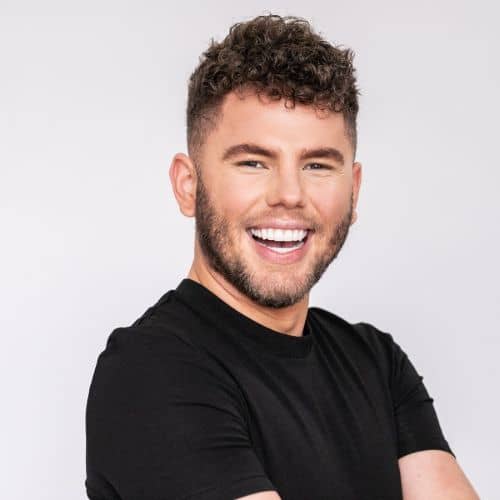 Dean McCullough is a TV & Radio presenter who hosts his own show every Friday, Saturday and Sunday from 10.30am to 1pm on BBC Radio 1.

With 10 years of presenting experience under his belt, Dean McCullough has become one of the most exciting young broadcasters in the country. Hailing from Belfast in Northern Ireland Dean has heart, charm and charisma by the bucket full.

In 2020, Dean was chosen out of thousands to host shows at BBC Radio 1 before quickly being given his own daytime slot on the station.

Previously Dean hosted Gaydio Breakfast where he interviewed some of the biggest names on the planet including Little Mix, The Spice Girls & Kylie Minogue. He is a passionate storyteller and engaging interviewer. He also travelled the world for Gaydio broadcasting from Chicago, Palm Springs, Los Angeles & San Diego. Dean has also appeared on programmes for Reform Radio, UK Radio Pride and BBC Radio Manchester. You can hear Dean’s voice in adverts for the NHS, Sky and the Northern Ireland tourist board.

Dean recently appeared on Morning Live on BBC One presenting a film about sobriety.

As well as TV & Radio Dean is highly experienced in live events and has hosted the red carpet at London Fashion Week for Mercedes Benz, The British LGBT Awards, The UK Blog Awards and charity events for The Make A Difference trust and The Albert Kennedy trust. Give this man a mic, put him in a suit and it’s showtime.

As well as presenting, Dean has a huge passion for the arts. He started performing at the age of 7 before moving to London to train professionally at Laine Theatre Arts. He has appeared in shows such as Godspell, The Mikado & High School Musical and has performed on Britains Got Talent, The 2012 Olympics and Children in Need.