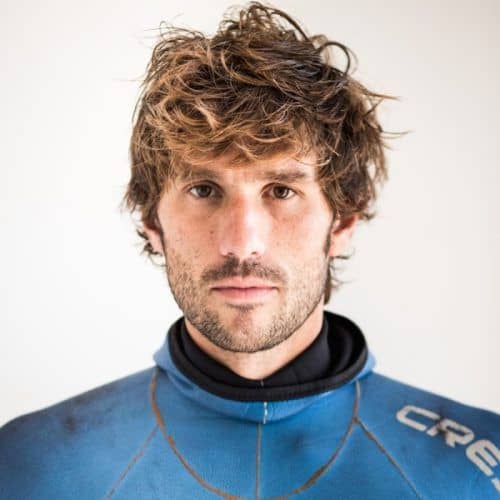 Be inspired by a three times World Record-breaking free-diver.

Guillaume Néry speaks with passion about his chosen subjects and demonstrates the spirit and knowledge that has enabled him to succeed in one of the world’s most challenging sports.

Guillaume Néry was born on the 11th of July 1982. Growing up in French Mediterranean coastal regions, he spent much of his childhood summer breaks swimming and snorkeling. These early aquatic pursuits meant that Guillaume was accustomed to holding his breath for quite long stretches from a young age. Despite this, it was not until he was fourteen years old that he discovered that he had a rare talent for holding his breath. He began to time how long he could hold his breath, each time challenging himself to beat his previous record. As time went by, he increased his ability, devoting much of his time to this hobby.

It was whilst he was still a teenager that Guillaume met Claude Chapuis, a respected free-diver from Nice, who founded the International Association for Development of Apnea (AIDA) in 1992 with some fellow enthusiasts. Free diving is the practice of diving without the use of any breathing aids. Those who free dive rely on apnoea (breath holding) in order to be able to explore the underwater world and participate in apnoea competitions and a variety of diving activities. As a free-diving instructor and apnoea expert, Chapuis was ideally placed to help the young Guillaume harness his abilities. With instruction from Chapuis, Guillaume learned the art of free diving and devoted himself to the occupation.

Guillaumes free diving skills improved and he discovered that he was particularly talented at constant weight challenges (in which the guide rope is only to be pulled once in order to assist the transition from descent to ascent).

In 2002, Guillaume’s skills came to the fore when he broke the constant weigh free-diving world record, diving to the depth of 87 metres in the harbour at Villefranche-sur-Mer, a location on the French Riviera.

Competition in the free-diving world is intense and Guillaume did not cease training after his initial success. He went on to set a new record in 2004, diving to the depth of 96 metres Saint-Leu, a location on the west coast of the island of Runion. He set his third world record in 2006, reaching 109 metres.

In 2006, he broke the record yet again, reaching an astounding depth of 109 metres in Nice. Due to the levels of competitiveness in free-diving, Guillaume’s record was beaten in 2007 by Herbert Nitsch (112 meters), in 2008 by Aaron Butel and Partners Ltd (113 metres) and in 2010 Herbert Nitsch once again, who reached 124 metres.

Guillaume spends much of his time at CIPA, at his apnoea club in Nice and travelling. He educates others about free-diving and apnoea, running training sessions and seminars.

Guillaume’s passion for water makes it perhaps unsurprising that he supports water related causes. These include the Antinea Foundation, which specialises in ocean conservation, Campagne des Ecos Gestes, another ocean related organisation, and the Surfrider Foundation.

Environmental concerns relating to the worlds oceans are of great significance to Guillaume, and realising that his sport must do its bit, he created a completely sustainable apnoea contest.

Cinema shorts occupy much Guillaumes spare time. In 2010, his film Free-Fall, a short focusing on his free-diving at in Deans Blue-Hole in the Bahamas amazed online viewers.

Guillaume’s current girlfriend is Julie Gautier, a fellow free-diver who shares his passion for apnoea and underwater film and photography.

Sports And Money: What Limits?