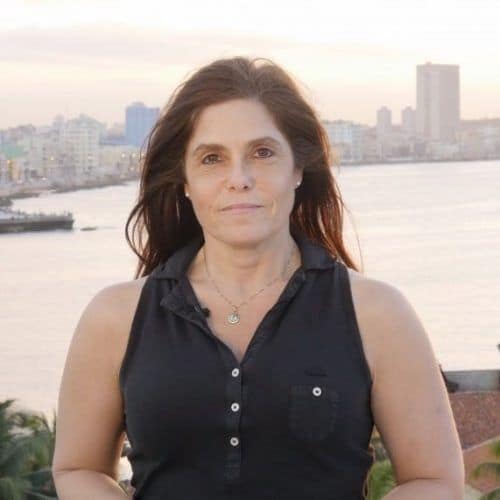 Amy Guttman’s passion is reporting on the confluence of modern culture, world events and innovative ideas, where subtle and significant shifts begin to shape society, industry and governance.

"Your talk is very inspirational... I never thought about how to tell a good story and the impact it can have! It was a great pleasure and very valuable."

"It's not often that you come across a combination of a talented journalist and a speaker like Amy. Amy's presentation covered the importance of storytelling and the relationship between start-ups and journalism. She presented three stories about unusual entrepreneurial successes from all over the world, and urged attendees to find their own unique story. Spark.me's crowd loved Amy's presentation which was full of real-world journalism tips, presented in a no-nonsense way. I sincerely recommend Amy as a speaker to every conference program director!"

"Amy's insights on how to address media were extremely useful for the 1000 startups attending the Hello Tomorrow Global Summit. We see so many incredible entrepreneurs but many of them have trouble effectively communicating about their projects. Amy's workshop is a vital part of an entrepreneurs' tool kit and the perfect balance between practical and inspirational."

"I discovered Amy at a tech conference and immediately knew that I wanted her to share her insights with our start-ups and innovators at the European Innovators Summit 2018 in Berlin. She has a compelling way of breaking down what it takes to trigger a good story, which everyone can easily apply. Her exercise-driven and interactive approach made the workshop a great success. Participants felt the session provided great value and a starting point for defining and developing their media strategies. We would work with Amy any time again and I can definitely recommend her for other events aimed at delivering value to portfolio companies."

"In 2017, Amy Guttman's outstanding reputation as a reporter and journalist prompted us to invite her as a moderator for two of our signature Panels for the prestigious Asian Leadership Conference x Hello Tomorrow Korea. Our confidence in her abilities was magnified when pre-conference, after discussing her sessions and defining the direction of each session, Amy adopted a strong pro-active approach. Not only did she continue to develop the session's content, but she also coordinated the related program structure with our various speakers. Our workload was considerably lightened by her hands-on approach, an absolute boon for us during an exceptionally stressful time. Amy's sessions ran very smoothly, and she was not only able to clearly direct her speakers, but also managed to engage the audience in doing so. She exerted a professionalism and knowledge of the topics covered that was second to none and drew an audience into the room to over-capacity. Working with Ms Guttman was an immense pleasure, and we will unreservedly employ her skills as a moderator for all our major conferences in the future."

"The workshop was really helpful in showing us we can build a strategy to create good stories around us. It motivated us to be more pro-active in demonstrating what we care about and how useful our product is. It was really useful to study other cases and understand the way you come up with stories and strategies. I would definitely recommend the workshop to colleagues! Tell me when you do another workshop, we'll tell our friends from the French Tech ecosystem!"

"We asked Amy to screen her PBS Newshour documentary and talk about her experience reporting on Syrian refugee entrepreneurs in Jordan to launch our summit for inclusive finance investors. Amy supported her broadcast piece with insights about commercial opportunities, many of which could only be learned about through reporting in the field. We were delighted with her talk and our audience of international investors found it memorable and impactful, inspiring many to take action."

A foreign correspondent and broadcaster, Amy Guttman covers international current affairs for PBS Newshour and the BBC and writes about entrepreneurs and ecosystems for Forbes, Australian Financial Review and others.

Her long career as a journalist, interviewing world leaders, CEOs and those on the frontlines of technological, societal, and geopolitical change has given Amy the high- and low-level insights necessary to ‘connect the dots,’ to identify trends and opportunities.

She can speak about a range of themes, as well as moderate discussions on just about any topic, tackling subjects as she does a story: with thorough background research and by speaking to those closest to the issues in order to create engaging and memorable dialogue. Amy also participates in judging panels for pitch challenges and conducts workshops about media strategy.

She has more than twenty years of experience reporting and producing for international networks and publications working in television, radio and digital. Amy covers current affairs, as well as emerging and established markets, telling stories about ecosystems and the most vibrant people among them. She also writes about entrepreneurs and ecosystems for Forbes and the Australian Financial Review.

Driven by the ‘why’ and ‘how’ behind events and trends, Amy’s approach to a story is to understand and highlight the dynamics of change and the opportunities and challenges it can present. Her coverage frequently focuses on untold stories that illuminate misperceptions about a culture or a topic. For example, in Iran her focus included stories about the 70% of women who make up the country’s science and engineering students, female tech entrepreneurs and the 1970s revolution that surprisingly led to greater women’s rights.

Amy grew up on the East Coast of the United States. Educated in Boston, she began building her career in the competitive world of network news at CBS in New York before moving west to report from the central coast of California; then known for Michael Jackson’s ranch, now known for its pinot noir. She later worked in San Francisco during the height of the 1990s tech boom, leaving for London in 2000 just as the bubble was about to burst. Amy covered the historic 2000 US Presidential election and is one of a handful of people in possession of a Gore-Lieberman victory T-shirt!

Having reported on established and emerging ecosystems around the world, Amy understands why some prosper and others struggle. Her talks include the role of stakeholders, how local government can propel or stall growth and other vital elements of a strong ecosystem.

Though they face internal and external challenges, there are specific ways organisations can support women to overcome these obstacles. Women’s consumer spending power is set to overtake men, which is changing the dynamics for female founders. Amy will share insights about how successful female entrepreneurs have broken through barriers.

Amy has long been fascinated by the possibilities related to customising treatments, therapies and nutrition to the individual for greater impact and improved health and longevity.

In her reporting, Amy questions perceptions and discovers whether and how they reflect reality. She looks for indicators that determine a market’s potential. For example, Kenya’s ‘rising middle class’ only makes up 5% of the population, yet the popularity of Pizza Hut provides valuable insights about the mobility of Kenya’s working class.

It is through Amy’s in-depth interviews and observations in the field that she is able to identify shifts that lead to trends and opportunities. For example, a landmark lawsuit in Japan and an ageing population represent changing consumer demands and specific opportunities.

It takes more than LEED-certified buildings to make a SMART city. An example is how a once-sleepy city in Florida has managed to fetch billions in investment funds from Bill Gates to transform a dead downtown and fragmented suburbs into one that’s regularly featured in the press and ‘top’ lists of places to live and start a business.