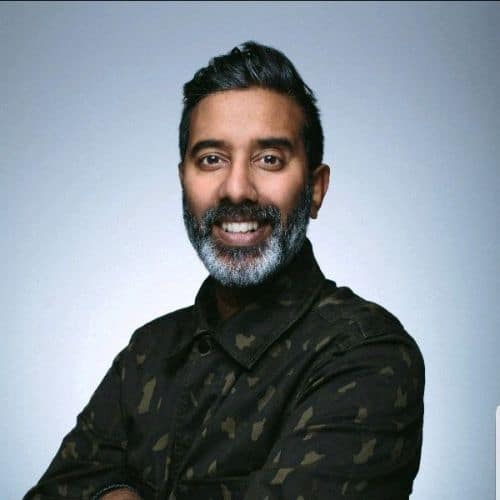 Nihal Arthanayake is an acclaimed broadcaster and TV presenter. He currently presents a daily daytime show on BBC 5 Live, and his unique interviewing style was recently recognised at the BBC Radio and Music Awards where he won Interview of the Year.

Nihal’s skillset is diverse and far reaching. He cut his teeth in the music industry as rap recording artist MC Krayzee A when he released ‘Into The Music’ on Hard Core One on BPM Records. In 1995 Nihal joined The Muddie Funksters and released EP Brown Like Muddie on GO! Discs Records and I’m The M The B The S The B for Hip Hop Connection Magazine. Nihal has also written music articles for Eastern Eye, The Face, Hip Hop Connection, The Observer and The Sunday Times. He was also briefly a member of Collapsed Lung from 1992-94.

Joining BBC Radio 1 in 2002 as the host of Asian Beats with DJ Bobby Friction established the start of a successful career in radio for Nihal. Bobby Friction & Nihal Present won a Sony Radio Award in 2003 and achieved Gold standard in specialist music– which became Asian Beats with Nihal when Bobby left. In 2007, Nihal became the presenter of the Weekend Breakfast Show on Radio 1 which was later moved to weekend afternoons. Nihal was given his own show BBC Radio 1’s Review with Nihal in 2009 which won Best Radio Show at The UK Asian Music Awards (UK AMAs). Nihal is one of only two radio DJs to present on both a mainstream and a specialist show, the other being Annie Mac. Nihal has also made several documentaries for BBC Radio 4 and the BBC World Service. Alongside his fantastic radio career Nihal has had many opportunities to DJ all over the globe, including Bangladesh, Germany, Sri Lanka, the Isle of Wight Festival and Glastonbury.

After making his first TV appearance in 1999 on BBC2’S Webwise, Nihal has had a steady flow of TV opportunities. Hosting his own rap show The Drop on MTV Base, the live CBBC show The Saturday Show: Extra and Celebrity Masterchef. He was also a co-host for three series of BBC2’s Asian music, arts and culture show Desi DNA alongside Adil Ray and Anita Rani. In 2004 Nihal presented Channel 4 documentary Where’s Your F*****g Manners? And BBC2’s Art School alongside Keith Allen and Ulrika Jonsson. Nihal has also appeared as a guest panellist on music comedy quizzes Never Mind The Buzzcocks and BBC4’s We Need Answers.

Nihal has been a trustee of the Southbank Centre and the British Council and is currently a Trustee of Home in Manchester and an Ambassador for Prince Charles’ British Asian Trust.

Nihal has garnered fantastic reviews as host of Radio 5 Live’s Afternoon show – Nihal Arthanayake, Asian Network’s Big Debate (on Fridays), and the daily Headliners podcast. His extensive knowledge of music, and inimitable storytelling enable him to secure outstanding interviews. Nihal can also be heard on the official Penguin Books podcast, interviewing some of the top authors in the UK today, including the likes of Sir Paul McCartney, Romesh Ranganathan, Suggs, John Boyne and more.