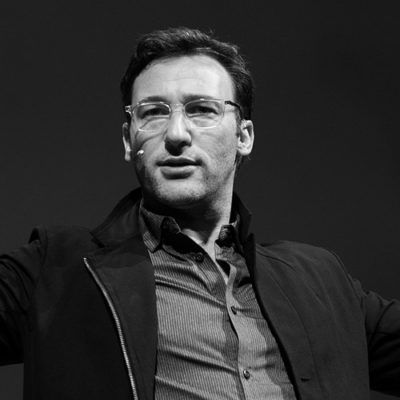 Ranked among the Top 50 world’s most influential management and business thinkers on the 2021 Thinkers50 list, Simon Sinek is a leadership visionary with the intent to change how business leaders think, act, and operate, to create environments in which people work at their natural best.

"Thank you for an incredible keynote on 'The Biology of Leadership.' Eye opening and thought provoking."

Described as “a visionary thinker with a rare intellect,” Simon teaches leaders and organizations how to inspire people. With a bold goal to help build a world in which the vast majority of people wake up every single day feeling inspired, feel safe at work, and feel fulfilled at the end of the day, he is leading a movement to inspire people to do the things that inspire them. Simon also has been voted global #1 motivational speaker according to Global Gurus 2021 list.

Simon is the author of multiple best-selling books

A trained ethnographer, Simon is fascinated by the people and organizations that make the greatest, lasting impact in their organizations and in the world. Over the years, he has discovered some remarkable patterns about how they think, act and communicate and the environments in which people operate at their natural best. He has devoted his life to sharing his thinking in order to help other leaders and organizations inspire action.

Simon may be best known for popularizing the concept of WHY in his first TED Talk in 2009. It rose to become the third most watched talk of all time on TED.com, with over 40 million views and subtitled in 47 languages. His interview on millennials in the workplace broke the internet in 2016 and garnered over 200 million views in the first month. This led to Simon being YouTube’s fifth most searched term in 2017.

His unconventional and innovative views on business and leadership have attracted international attention. From American Airlines to Disney and MARS, from big business to entrepreneurs to police forces, Simon has been invited to meet with an array of leaders and organizations in nearly every industry. He has also had the honour of sharing his ideas at the United Nations, the United States Congress and with the seniormost leaders of the United States Air Force, Marine Corps, Navy, Army and Coast Guard.

With a vision to change the way businesses think, act and operate, Simon has partnered with Ernst & Young to develop products and services to help many companies transform their businesses. He is an adjunct staff member of the RAND Corporation, one of the most highly regarded think tanks in the world. He is also active in the arts and in the non-for-profit world (Simon prefers to call it the for-impact world).

Leaders eat last: Why some teams come together and others don't

Why do only a few people get to say “I love my job”? It seems unfair that finding fulfillment at work is like winning the lottery; that only a few lucky ones get to feel valued by their organizations, to feel like they belong.

Imagine a world where almost everyone wakes up inspired to go to work, feels trusted and valued during the day, then returns home feeling fulfilled at the end of each day.

This is not a crazy, idealized notion. Today, in many successful organizations, great leaders are creating environments in which people naturally work together to do remarkable things.

When the conditions in our organizations are right, we naturally trust each other and cooperate. But when leaders neglect the environment in which their people must work, politics, silos, cynicism and self-interest prevail — all things that make it even more difficult for us to work together. The best leaders know how to build those conditions and the best organizations are the ones in which the people work together to confront danger and seize opportunities.

Simon will explain what it takes to create an environment in which people work as they were designed—together. It is under these conditions we are at our natural best.

In this in-depth leadership talk, the renowned leadership expert shows the audience the difference between “authority” and “leadership” by using a case study where a leader risked their own life so others could survive, where in the business world, it’s the other way round.

Sinek says that good leaders are not born like that, they’re made like that because biologically we are wired in a way that only serves our self-interest.

Revealing to the audience how leadership and trust is attainable, Sinek discusses how leaders should make their staff feel safe in the work environment or these people will end up exerting effort to find their own ways to feel safe and secure instead of using that effort for productivity.

How can we win a game that has no end?

The simple answer is we can’t. However, that’s exactly what so many companies are trying to do. The problem is, there is no such thing as “winning business.”

In a game with no finish line and no agreed upon rules or metrics it is impossible to “be number one,” “be the best” or “beat our competition.” In this Infinite Game, there is only ahead and behind. Leaders of organizations must understand the rules of the Infinite Game. Failure to do so dramatically increases the chance that they will set themselves on a path that eventually drains them of the will and resources to play at all. Eventually they will drop out of the game and no one will care. Their competition will just keep playing without them.

In his talk, Simon explores how understanding the rules of the Infinite Game is essential if any leader wants to stay ahead and outlast any competitor…forever.

The power of purpose

He states that 90 percent of people go home at the end of the day and feel unfulfilled from their job. There is, however, a difference between liking your job and really loving your job, but 90 percent have not yet found their passion.

Every organization in the world functions on three levels — what it does, how it does it and why it does it. He believes that once people or businesses discover or realize the reason behind what they are doing, passion can be restored and new levels of success reached. Connecting with the “why” in your life provides a clear and purposeful path.

The importance of embracing trust and similar core values on a company-wide level is presented in Simon Sinek’s powerful corporate culture speech.

Documenting the importance that collaboration and camaraderie play in the operation of a successful workplace, the speaker explains that without knowing people one can never know their business — nor can they innovate or make new discoveries.

Sinek argues that surrounding oneself with those who share similar values and beliefs will help both parties to grow and evolve by promoting one’s own strengths and learning from the strengths of others.

The takeaways garnered from the presenter’s corporate culture speech are indicative of the parallels that exist between effective social interaction and prosperity in the business world. By knowing and trusting those that one works with, not only will the company flourish, but the individuals associated with said company will as well.

In his good leadership presentation, Simon Sinek explores why good leaders make you feel safe. The management theorist posits that in the military, they award metals to people who would sacrifice themselves so others might gain. While in business, bonuses are given to people who are willing to sacrifice others so that we may gain.

When people feel safe, the result is trust and cooperation. While external factors are rarely under our control, we can control what happens internally. When people feel safe inside an organization, they naturally use their talents together to overcome obstacles.

The speaker’s good leadership presentation compares leaders to parents, who would not downsize their children. When employees feel their leader is fighting for them, they are likely to do the same. Sinek also notes leadership is a choice, not a rank. Just because someone has the authority does not make them a leader.