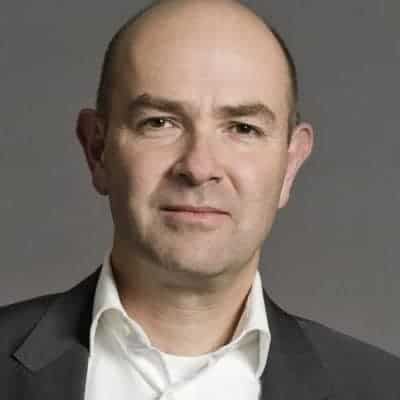 Social Media Speaker Chris Anderson is the co-founder of 3D Robotics, an author, former editor of WIRED, and an expert of up-and-coming technologies and the cultures that encircle them.

"He was phenomenal - we were all so impressed and impacted by his presentation."

"Anderson amazing, scored well, changed the way people thought about their business, most impactful speaker, first time in a long time someone really made a difference, not just entertain/inspire."

"All of the feedback from Chris's presentation to IBM last week has been really positive. Our clients, as well as my colleagues, all thought Chris did a really great job. Everyone's very happy so it's all good! So all in all, this was a great success. Please pass along my thanks to Chris for being so terrific, both on-stage and off. Until the next time..."

"Chris was terrific! Very nice guy and easy to work with. He got a great response to the book signing - everyone enjoyed meeting him and were impressed with his insights. Thanks again for your help."

Anderson is one of the most forward-looking and articulate speakers on the effect of new technology on business. His first book, The Long Tail is the definitive account of how the internet undermined blockbuster-culture and created an economy of targeted niche products. His next book, Free explored the new online marketplace of “free” products, explaining how companies can make money by giving things away. Now, in his newest book Makers Chris unfolds for us the latest chapter in the digital revolution: a physical revolution.

Makers: The New Industrial Revolution introduces a new era of micro-manufacturing. New technologies such as 3D printing and electronics assembly allow anyone with an idea to build it. Data can become objects — and everyone nowadays has access to data. This means the extraordinary democratisation of information which the internet has enabled is about to be mirrored by the democratisation of physical creation. In Chris’ phrase, “atoms are the new bits”.

Chris isn’t sitting on the sidelines of this revolution. He is the CEO of 3D Robotics, a leading unmanned aerial vehicle (UAV) company, with offices and factories in Berkeley, San Diego and Tijuana, Mexico. He is also the founder of DIYDrones, an aerial robotics community with more than 40,000 members. Chris and 3DR are the leaders in open innovation. The industry is at the intersection of everything from big data to the Internet of Things.

As Editor-in-chief of Wired, Chris led the magazine to two dozen National Magazine Award nominations, winning the prestigious top prize for general excellence in 2005, 2007 and 2009. Chris stepped down from his role at the magazine after an incredibly successful 12-year run to become CEO of 3DRobotics. He worked at The Economist for seven years in various positions and served as an editor at the two premier science journals Science and Nature.