The working life of a political cartoonist is unusual. We have to come up with a topical idea, then draw and paint it up to a finished piece, all to a daily deadline. But my job is even more unusual. Unlike all other cartoonists, I don’t work for tomorrow’s edition – I work for the same day’s. That’s a deadline of 11am.

The Standard has a 90-year history of political cartooning. And all the cartoonists worked in different ways.

In the 1930s and Forties, Low worked away from the Fleet Street office. He would never submit roughs to his editor, and instead drew alone in his studio in Hampstead (with no telephone). The cartoon was collected at 5.30pm. “Editors and people connected with editors are a damned nuisance,” he said.

Vicky, the Standard’s cartoonist in the late-1950s and early Sixties, was more conventional in his day-to-day work. He didn’t need to worry about editorial interference. The right-wing owner, Lord Beaverbrook, hired the socialist Vicky specifically on the basis that he could draw what the hell he liked.

More recently, Jak, who joined the paper in 1966 and remained for 31 years, was infamous for how he structured his days. In the office at 6am. Six ideas to the editor by 8.30am. His cartoon was 99 per cent drawn up by 12.30pm. Then a lunch, never less than three hours. He would roll back in at the end of the day to add the final touches, sometimes just a missing brick or two in a wall.

Unlike my predecessors, I draw for the same day’s paper. I’m a day ahead of all other cartoonists and have to take advantage of that.

I’m a day ahead of all other cartoonists and have to take advantage of that.

I get up at 5am and as I cycle across London towards the Kensington office ideas are already rattling around my head. Once in, I scour the news sites for the big stories of the day. People often ask “how do you come up with your ideas?” To that, I have no answer. Some days it’s an easy birth. Others, it’s a horrendous slog, with the deadline creeping up, ever more frightening.

I present my ideas to the editor before he goes into conference at 8am. God willing, he likes and picks one.

I then have two and a half hours to draw (Indian ink on cartridge paper) and paint (water colour) a cartoon. Photoshop is there for tweaking, and the cartoon’s on the page by 11am.

Sometimes there’s breaking news. When Prince Philip announced at 10am on an August morning that he was to retire, I was literally back to the drawing board with minutes to do a new cartoon on the subject. A borrowed hairdryer from the Fashion department helped a frantic drying of ink. 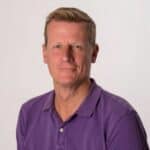