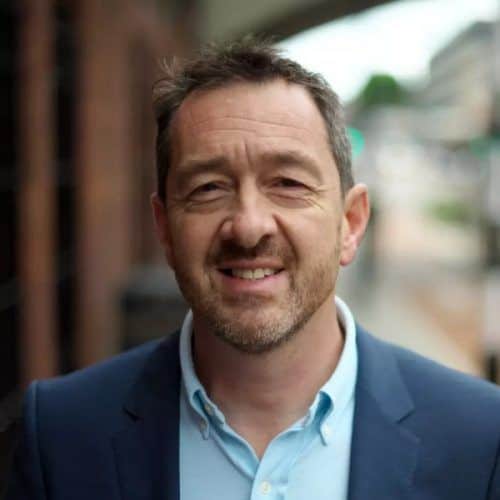 One of the UK’s most successful and famous cyclists, World Champion and Olympic Gold medallist Chris Boardman has left his mark on sporting history.

"Chris was a great success, thank you."

A determined man who has experienced amazing levels of success, Chris Boardman can help to encourage and motivate others to succeed. As he has also had to overcome challenges and to change the way in which he serves the sport he loves, he understands that success will not necessarily materialise in the anticipated form.

Christopher Miles Boardman was born in the village of Hoylakein the Wirral on the 26th August 1968. He was an active child with an early love of cycling. He first raced at the age of 13 and his talent and enthusiasm were clearly apparent; at the age of 16, he became a member of the UKs national cycling team. As a junior cyclist, he won numerous time trials and even beat the record for the Junior 25 Miles trial in 1984. He was National Champion in both junior and adult competitions several times.

Cycling to Success at Barcelona

Encouraged by his early success, Chris trained hard and was rewarded when he soared to fame in 1992 for winning a Gold medal at the Barcelona Olympics. Not only was it a triumph for Chris, but a cause for UK cycling enthusiasts to celebrate, as he was the first to win gold for the UK in cycling for 72 years. It was in 1992 that Chris was awarded an MBE for his cycling.

At the Atlanta Olympic Games in 1996, Chris won bronze in the Men’s 52 km time trial. Years later, he was an advisor to the British team at the Beijing Olympics in 2008, the year that the team was more successful than they had ever been.

Like many world-class cyclists, Chris has competed in the gruelling Tour de France several times. He won the right to wear the prestigious yellow jersey in three stages of the Tour (in three separate years.)

Anxious to achieve his best in different cycling challenges, Chris set out to break the World Hour Record. Despite not achieving the result he wanted initially, Chris learned from his mistakes and in July 1993, he went on to set a new record at 52.270km. In the world of cycling, achievement rarely go unchallenged for long and this distance was soon beaten.

In September 1993, determined to reclaim his position as record holder, Chris went on to cycle an amazing 56.375km in the hour. The records Chris and his rivals set in the 1990s were in part possible due to new bicycle designs and technologies, something that the Union Cycliste Internationale eventually decided affected the outcomes to an unfair extent. The rules were changed and participants were then only allowed to use standard racing bikes. Undeterred, Chris continued to compete under the new rules, managing to beat the record for a traditional bike.

Chris retired from professional cycling earlier than he had intended due to the fact he was diagnosed with an illness which required treatment using testosterone, a drug banned in professional sport. Despite his initial disappointment, Chris went on to work in other cycling related roles. In 2009, he was listed in the British Cycling Hall of Fame.

Always known for his love of new cycling technologies and innovations, Chris has set up his own bicycle brand, Boardman Bikes. Now well known, the bikes and accessories produced are coveted by many cyclists due to Boardman’s insistence that they conform to his standards of design, performance and quality.

Chris Boardman lives with his wife, Sally Anne, and their six children in Hoylake, the village where he grew up. He also shares his home with the family beagle and a pet cat. He has numerous hobbies, including archery, cave diving and writing. He still spends some of his time cycling but has also taken up running.