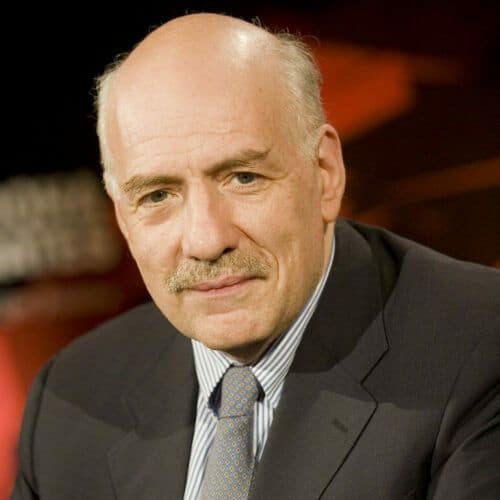 World-renowned journalist with more than 40 years of experience

Tim Sebastian is the host and chairman of Conflict Zone, Deutsche Welle’s hard-hitting, flagship political talk show. Prior to this, he chaired The New Arab Debates, also broadcasted and distributed worldwide on Deutsche Welle TV between 2011 and 2015.

"I am happy to report that both of Tim's panels were a smash hit! Everyone in the audience reported back to me with enthusiastic pleasure and murmurs of 'I loved the moderator, wow!' - including our stakeholders, our senior management, and my colleagues within the department. Our international audience also seemed to love Tim's unapologetically direct approach (a view I share with them). I saw many people smiling to themselves or gasping out loud as he pressed our panellists for answers. Tim himself was also a pleasure to work with, and a true gentleman. I appreciated that he followed up after each of the panels with our panellists, ending some exciting and heated sessions in a very diplomatic manner. Everyone, including our speakers, walked away with smiles on their faces after Tim's sessions."

"The Forum went very well and Tim was outstanding in moderating the sessions."

"The entire conference went off very well and Tim did a wonderful job. There was a near unanimous feedback from amongst the panelists and the audience about the two days in terms of the quality and content of meaningful discussions as well as high level of conference facilitation."

"Tim was great - he challenged the panellists very well. Tim didn't hesitate to ask uncomfortable questions, and I think overall he got a good conversation going. He also handled the questions very well - it can be tricky sometimes with the audience here. Overall I'd say he was the best moderator of the event."

Who is Tim Sebastian?

The award-winning former BBC foreign correspondent was the first presenter of HARDtalk, BBC World’s daily half-hour interview programme, where he worked for more than seven years.

Tim was the founder and chairman of The Doha Debates which were broadcasted across the globe on BBC World News from 2004 until 2012. The programmes, recorded in the Gulf state Qatar, provided a unique, uncensored forum for discussing the most controversial issues in the Arab and Islamic worlds.

In 2012 he presented the Outsider Debates, recorded in India and screened on Bloomberg TV.

Born in London in 1952, Tim speaks Russian and German fluently and also holds a BA Honours degree in modern languages from Oxford University.

A best-selling author, he has written eight novels and two non-fiction books.

In 2015 he was elected a Fellow Commoner at Corpus Christi College, Cambridge to serve during the academic year 2015-16.

Tim has written widely for newspapers including the Mail on Sunday, The Sunday Times and the New York Times.

He also chairs conferences and seminars. He has a wealth of experience hosting events and award ceremonies, both at home and abroad.