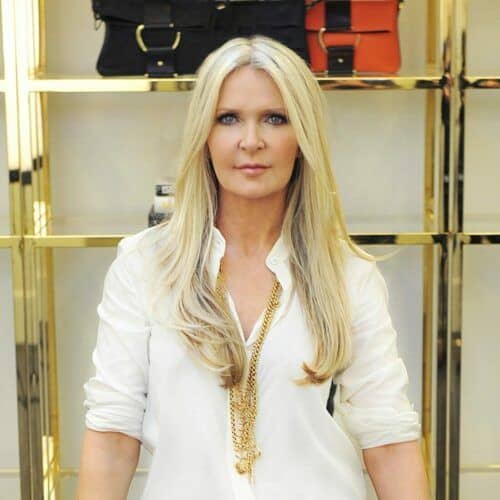 Since the launch of her signature label in 1990, Amanda Wakeley OBE has developed an international reputation for designing stylish, luxury womenswear and accessories, winning awards for her creations in the process and gaining an army of A-list clientele.

"Amanda was absolutely riveting. Our expectations were met and exceeded. Thank you!"

Having won the British Fashion Award for Glamour three times, she regularly dresses some of the world’s most glamorous and famous women – including for the red carpet. She’s also had the honour of dressing many members of the world’s Royal Families, including Queen Rania of Jordan and the late Diana, Princess of Wales. One of her latest high profile clients was Meghan Markle, who wore an Amanda Wakeley coat and Midi Dress during a special service celebrating Commonwealth Day, marking Meghan’s most high profile event with the royal family to date, at the time of writing (2018).

In 2018, Amanda joined Sky News as a commentator during their live coverage of the royal wedding of HRH Prince Harry, the Duke of Sussex and Meghan Markle, the Duchess of Sussex.

She taught herself everything she knows, and has been driven to make clothes all her life. Whilst working for an influential New York designer and retailer, she learnt a great deal about business, continuing to work on her own designs and gaining the confidence to launch her own brand.

Beginning with ready-to-wear items, her collection now includes fine jewellery and bridal gowns, as well as other fashion accessories. Her store opened on Fulham Road in 2009, and her ranges are stocked by some of the biggest fashion retailers, including Harvey Nichols and Harrods. As such, her brand is globally recognised.

Since 2009, Amanda has expanded her vision of building an international luxury lifestyle brand with the support of AGC Equity Partners, a private equity firm based in London, to fuel its expansion.

Amanda was awarded an OBE for her services to the fashion industry in 2010 and is also the winner of numerous awards, including three British Fashion Awards.

Having faced a number of tough challenges during her quest for business success, she now raises funds and awareness for a number of charities and causes, and has co-chaired the committee for the Fashion Targets Breast Cancer appeal, which has, to date, raised over £10 million.

The rise of a successful fashion business

Fashion; The past, present and the future

How to develop a luxury brand

Anecdotes of her life and experiences

Getting your business to a successful international level