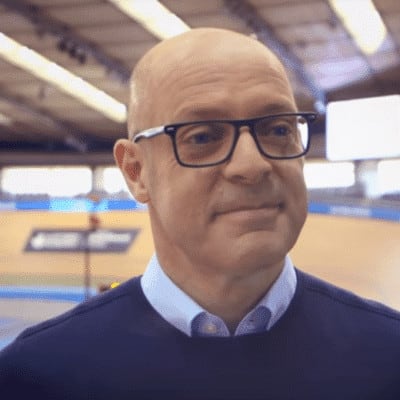 Sir Dave Brailsford is widely credited as the driving force behind Team GB’s phenomenal results in both the Beijing Olympics in 2008 and London 2012. Under his leadership Team GB is the most successful track cycling team in modern history.

Dave spent four years as a competitive cyclist in France before returning to the UK to study for his first degree in Sports Science. He subsequently went on to study for an MBA at Sheffield business school. Dave Brailsford has been involved with cycling throughout his career.

He was first employed by British Cycling as an advisor when Lottery funding began in 1996. British Cycling based itself at the Manchester Velodrome, an Olympic-standard track, and Dave soon became Programme Director before becoming performance director. Under Dave Brailsford’s guidance, numerous successful cyclists have been directed by him, including Sir Chris Hoy, Bradley Wiggins, Jason Kenny, Victoria Pendleton, Mark Cavendish and Laura Trott.

In 2010, Dave Brailsford also became the manager of the new British-based professional team, Team Sky. In 2012 as Sky Team principal he oversaw Bradley Wiggins’ victory in the Tour de France.

In his corporate presentations and motivational speeches Dave Brailsford highlights the importance of focus, motivation and teamwork – and how leaders have to learn to deal with different people and different reactions to success and failure. Drawing on his experience in sports science, he explains that motivation comes from within: “You don’t make winners, you help them to focus and optimise their natural talents”. He also refers to ‘Podium Coaching.’ This relates to the crucial role that a coach plays in an athlete’s career. If we expect a competitor to become one of the best in the world, then we must expect the same of their coach.

A fabulous motivational and teamwork speaker ideal to inspire and capture any audience at corporate level, Dave Brailsford brings a blend of sporting and business acumen, which he has utilised to lead and develop the British Cycling team into one of the most respected and successful Olympic Programmes across all sporting disciplines.