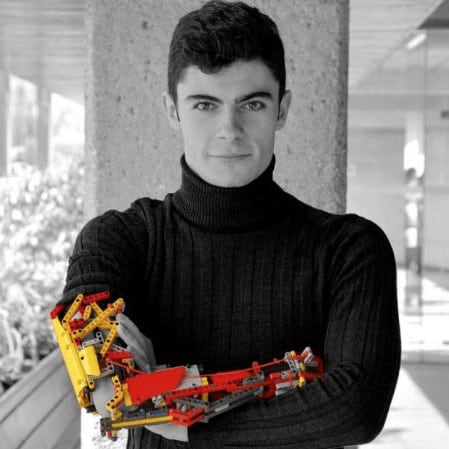 ‘Hand Solo’ – An incredible story of a young inventor

David has been inspiring people with his motivating story since he was 9. His powerful and yet simple message to overcome obstacles with a smile and a positive attitude has been shared among audiences from different countries from his home town in the tiny Principality of Andorra to Hong Kong, Brazil, and Spain.

David was born without a right forearm, affected by Poland syndrome at the age of 9. Ever since he was a child, he was obsessed with Lego.

He spent his childhood building cars, planes, helicopters, and eventually, his own prosthetic. The self-named “Hand Solo” decided to take his Lego-building skills to the next level. At age 18, he perfected his designs with the MK2, made out of a lego airplane, a prosthetic arm with the ability to bend and pick up objects with a pincer-like grip. Later, he dissembled a lego helicopter to build his 100% functional arm prosthesis.

He became part of the Guinness World Records as the first fully functioning LEGO prosthetic arm built and worn by him in 2017.

David is currently studying Bioengineering at the UIC (Catalonia International University) (UNIVERSITAT INTERNACIONAL DE CATALUNYA), where he was awarded the Innovation Prize in 2018.