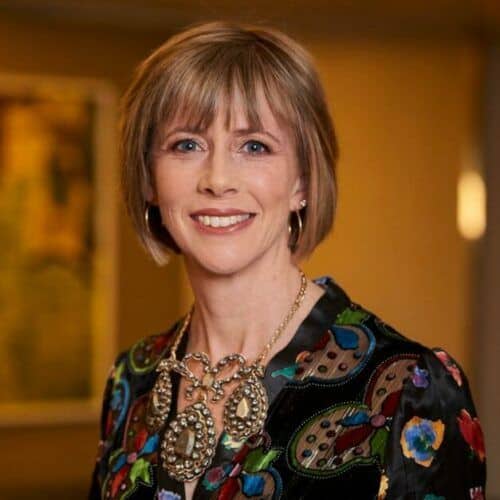 A British-American journalist, Edie Lush is an author, executive editor of Hub Culture, a communication trainer and MC. She is co-host for the award winning Global GoalsCast podcast which tells the stories of the champions making the world a better place.

"Thanks Edie for teaming up with us! We all think you did a brilliant job. Again, thank you so much for participating and making this such a great event! We truly enjoyed working with you and were really impressed - not only by you moderating on stage but also how you managed all of the speakers as well as the valuable input you gave us on the topics and the run of show ahead of the event. The end result was in the expertly moderated and engaging discussions and the buzz of the whole event."

"Edie Lush is a skillful moderator and MC who engages her audience with strong, personable communication skills. She understands group dynamics and knows how to spark discussion and exchanges. Her interest in cleantech made her an ideal moderator for the Monaco Transition Forum."

"Edie has chaired events and thought leadership discussions for Hub Culture all over the world - from Vietnam to Los Angeles to Austin to Paris. She brings intellect, decorum and wit to these moments - whether intimate dinners or large conference halls."

"Thank you for being the best moderator and master of ceremonies last night. The graciousness and levity you brought to the proceedings, was no mask for the seriousness with which you held the panelists to account."

Edie has thousands of interviews under her belt. In her role as Executive Editor at Hub Culture she is responsible for creating impactful social media content around the globe, from events in Davos to the UN General Assembly in New York to the COP Climate Summits.

She has been the Economics and Political correspondent for Bloomberg Television, a columnist at The Week magazine and the Associate Editor of Spectator Business magazine. Her work has appeared in many publications including Prospect, the Spectator and the BBC.

She runs her own business providing senior Leaders, Influencers, Academics and Executives with Communication training – focusing now on increasing impact in both online and in person appearances.

Before moving into journalism Edie was a political analyst for investment bank UBS in London and New York-based hedge fund Omega Advisors. She was an International Relations specialist for both the Secretary General of the Organization of American States in Washington, D.C and Hungarian political party SzDSz in Budapest.

Edie studied Political Science at UCLA and holds a Masters in International Relations from Yale University.

She is a regular speaker and Event MC – her areas of expertise  include Technology,  Entrepreneurs and the Sustainable Development Goals. She has chaired three Literary-style Festivals for Intelligence Squared including one on Climate Change and another on Everest. She has been Chair of the British American Project and sits on the board of the Ellen Meloy Fund for Desert Writers.