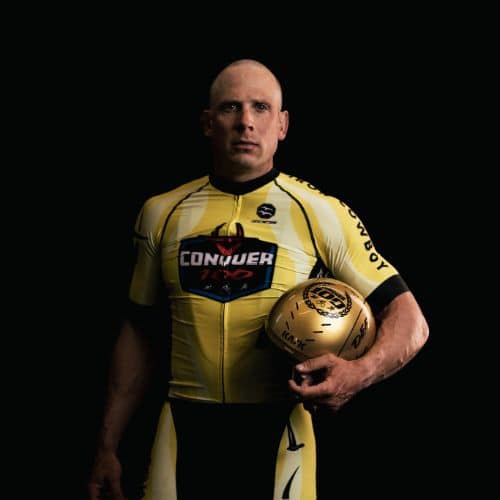 James Lawrence is a top motivational speaker, endurance world record holder, triathlete, and subject of the documentary The Iron Cowboy: The Story of the 50.50.50. Known to the world as The Iron Cowboy for wearing a cowboy hat during Ironman races, James completed the greatest feat of human endurance: 50 full distance triathlons, in 50 states, in 50 consecutive days (50.50.50).

"..the story that I heard James talk about not only made me tear up and cry about 3 or 4 times while he was speaking. That led into a drive home with sobbing and just being overwhelmingly happy with the knowledge that I had gained from listening and knowing that now I could do whatever I wanted to do…James “IRON COWBOY” Lawrence, Thank you, Sir!!!"

"We enjoyed our time with James tremendously. His stories were able to inspire so many of us with his message about the resiliency of the human spirit, and the power our decisions can have over our circumstances. He will leave you feeling encouraged, motivated, and ready to do something impactful!"

"It really felt and came across that he listened to our feedback because the keynote he delivered felt perfectly tailored for our community and event! I’ve received overwhelmingly positive feedback on James keynote from the attendees. They raved about him with one of the top quotes being “James was the best speaker we’ve heard at one of our events in the last few years if not EVER!!” He really brought his Iron Cowboy presence to stage as he captivated our community with his experience weaving in the images, quotes and videos perfectly. He was charming and memorable even when we had a tech malfunction with the video – he kept the energy of the attendees high throughout."

After breaking several Guinness World Records, James wondered if he had truly found his mental and physical limits. He knew there was more. Experience firsthand the remarkable journey of James Lawrence and his family.

Known as the Iron Cowboy, James earned this nickname from the public after he started to wear a cowboy hat during the marathon portion of his Ironman races to be identified by his children quickly. With two Guinness world records under his belt, James and his family attempted to do something every person deemed impossible, 50 full distance triathlons, in 50 states, in 50 consecutive days (aka: 50.50.50).

His combination of energy, humor, determination, and achievements captivates his audience and creates an inspirational and awakening phenomenon for all.  James’ story of reaching new limits is one everyone can relate to. He is an ordinary guy, whose extraordinary personal story will make you laugh, cry, reflect, and leave you inspired to reach higher. James has spoken all over the world, on stages in more than 20 countries. His story and his inspiring message includes the following themes:

Sports Illustrated ranked James in the top 50 fittest freaks with Lebron James and Conor McGregor, two of James’ favorite athletes. RedBull declares that ‘when it comes to endurance, he is unstoppable’ and Success magazine named him ‘The Most Enduring Man In The World.’ He has redefined the definition of impossible and shares his journey with audiences around the world.

James Lawrence lives with his wife, Sunny, and their five children in Utah.

When James Lawrence (aka the Iron Cowboy) announced his plan to complete 50 Ironmans in 50 consecutive days in all 50 states, the only person who believed that he could pull it off was James himself (and his wife, Sunny). An Ironman consists of a 2.4-mile swim, a 112-mile bike ride, and a 26.2-mile run. In Lawrence’s case, he would have to complete those distances and then make it to the next state in time to do it all over again the next day.

Even Lawrence’s coach didn’t think he could complete the challenge; enough that he penciled in another event the day Lawrence was supposed to complete the 50. But with the support of Sunny, their five children in tow, and with grassroots support always conjured at the last minute via Facebook, he accomplished what he set out to do. Iron Cowboy is the story of Lawrence’s herculean 50-day journey and all the extraordinary, miserable, and life-threatening events that happened along the way, as well as a glance at his life leading up to the mission and winning two prior world records.