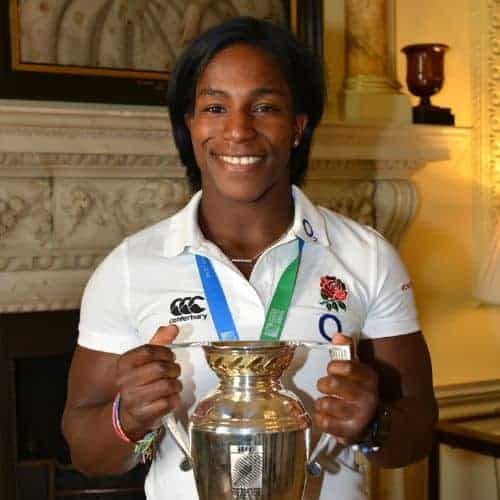 Maggie Alphonsi is the face of international women’s rugby and arguably one of the most well-known names in women’s team sports on the planet. Before announcing her international retirement in 2014, she represented her country an impressive 74 times, scored 28 tries, won a World Cup and helped England win a record breaking seven consecutive Six Nations crowns.

"Maggie kindly agreed to speak at the WACL (Women's advertising club of London) 'Gather' event, an annual conference run by our club to inspire and inform young women in the marketing and media community. Maggie gave an exceptionally compelling talk on her life and career, focusing on what drove and motivated her throughout. Not only is she a hugely successful elite sportswoman she also has the rare gift of being able to communicate what it takes to achieve those heights in a thoroughly engaging and accessible way. The feedback from the attendees was exceptional for the event and Maggie's talk resonated with all."

"Maggie is an incredibly inspirational speaker. Her presentation was topical and acknowledged the important role that teachers, PE and sport plays in lives. She presented with high energy, emotion, empathy and humour and ignited the audience. She was awesome!"

"Having heard lots about what a great addition to an event Maggie would be, she did not disappoint - from the moment she arrived, her warm smile and easy manner made her a fantastic guest - she was happy to be interviewed, delivering passionate viewpoints about her personal story in rugby then chatting effortlessly to staff - and then taking part in a very honest way in our panel discussion - finally, joining us for drinks and more chatting after, she was just brilliant and inspiring - as well as incredibly honest which is so refreshing. We really enjoyed having her and everyone commented that she was a fantastic addition to the event."

"Maggie was just excellent at our Grand Women’s Summit event at the Crabees Grand National Ladies Day. In addition to being absolutely inspiring on the panel and offering thought provoking views on gender balance and her on experiences, she was just brilliant to have on board in terms of speaking with the media and interacting with the delegates. The guests attending they felt very comfortable approaching and speaking with Maggie and discussing their own experiences with her, which added even more to the event experience."

"Wow! You have left quite a mark on our school. Since your visit with us, your words and you as an individual have become embedded within our narrative and essence. I hear staff referring to you and what you said all the time, and due to the quality of the way that you connected with us, we have made significant changes without really making significant changes. We seem more focused, clearer in our goals and hungry to want to work for each other, and more aware of how important each of us and our roles, however simple they may seem are in helping achieve the ‘gold’ we are looking for. I do not think that it would be unreasonable or too over dramatic to say that you have been one of the most powerful things to have happened to our school in the 4 years that I have been here, and for that we are all enormously grateful."

"Maggie spoke at our staff engagement day; to hear her talk about overcoming adversity and aiming for the best in life was incredibly motivational. It was just what we needed to energise us before we embarked on an afternoon of delivering community projects - she is truly inspirational."

"Maggie’s keynote address to open our professional services conference was superb. Maggie connected brilliantly with the audience and there were even some cheers at the end as well as very loud applause. Lots of people commented afterwards how great the talk was and Maggie was mobbed by people wanting to speak to her! I really enjoyed working with Maggie as she was so easy to get on with and a great addition to our day."

Before announcing her international retirement in 2014, Margaret Alphonsi represented her country an impressive 74 times, scored 28 tries, and helped England win a record breaking seven consecutive Six Nations crowns. She was also a crucial member of the team that won the 2014 Rugby World Cup for the first time in 20 years and was part of the team that was crowned the BBC’s Sports Personality Team of the Year. She was also named Sunday Times Sportswoman of the Year and inducted into the World Rugby Hall of Fame

Through her England rugby career Maggie has become a household name but also a media professional, and since retiring she has commentated on live rugby matches for SKY Sports, BT Sport and the BBC. In 2015 she became the first ever former female player to commentate on men’s international rugby when she was signed up by ITV for the Rugby World Cup, and she continues to work with ITV Sport across their rugby coverage.  Maggie is also the first ever former female player to become a columnist for a national newspaper, and you can regularly read her thoughts and opinions in The Telegraph.

Maggie made history by becoming the first England Women’s player to be elected as a National Member of the Rugby Football Union’s Council. She is one of just six females on the 56-strong Council and her role is to be a person of experience and influence in the Game, which includes a leading role in the Diversity & Inclusion steering Group.

From South East London, Maggie has taken her education as seriously as her rugby obtaining an MSc in Sports & Exercise at Roehampton University, a BSc in the same subjects at De Montfort University and a BTEC National Diploma in Leisure Studies at Hertford Regional College. Additionally, she has been awarded an Honorary Doctor of Arts from the University of Bedfordshire

Maggie is delighted to be a brand ambassador for Jaguar LandRover and also SportsAid. SportsAid helps the next generation of British sport stars at the start of their careers when their parents are their only other means of support. The charity helps these athletes by giving them financial assistance to help them meet the cost of training and competing. Maggie also represents charities such as Sporting Equals and SKRUM, the latter of which aims to give the youth of Africa hope through rugby.

Maggie is an excellent speaker, and is well qualified to share her experiences. Certainly when she shares those experiences, you don’t need to be a rugby fan to be interested or inspired by how she has become a prominent figure in the challenging world of a male dominated sport. Delivering to a wide variety of audiences, from corporate businesses, to sports events or going into schools to inspire the next generation, Maggie has a story you want to hear.