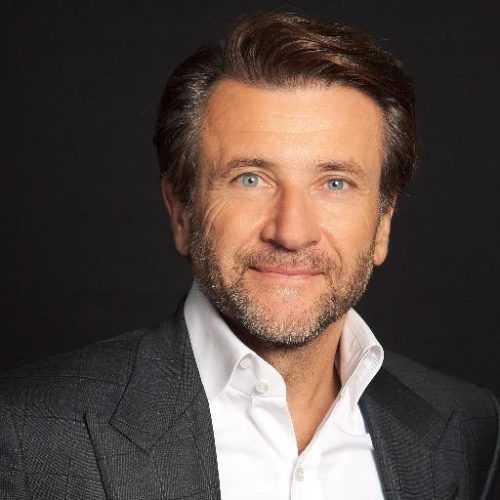 Dynamic IT entrepreneur, founder and CEO of Herjavec Group and leading Shark on ABC’s “Shark Tank”

Robert Herjavec is a serial entrepreneur and the founder of the Herjavec Group. He is an energetic, humorous and interactive presenter who engages with his audience inspiring them to keep up with the pace of technological change. He imparts life and business experiences during his presentations to give his audience very practical and tangible tools they can adopt into their own lives.

"In my 30 years with the association I have never received the response I am getting today concerning Robert's speech last evening. It is by far the most well-received presentation in our history. Mr Herjavec connected with the audience in a way that was 'magical'. He personal story is powerful and inspiring and his delivery authentic and heartfelt. BRAVO!"

"I loved how relatable and personable Robert was! Robert had great insights for entrepreneurs and I loved hearing the inside scoop on Shark Tank."

"Robert Herjavec was fantastic. We've heard so many positive comments from clients and internal staff already. I would recommend him without hesitation. Robert was focused, attentive, and very engaged with our audience and our executives. Dare I say this was our best one yet!"

"The FAST team was thrilled with Robert's presentation at our annual kick off. He spoke about adapting to change in our industry where the only thing constant is change. A truly motivating and passionate speaker."

"I know I speak from our entire team when I say it was inspiring and an absolute pleasure to attend Robert's outstanding closing keynote, it was the highlight of the entire conference."

"Robert's presentation was inspiring and engaging. He is humble and opinionated, curious and knowledgeable on a wide array of subjects. Robert had our group laughing out loud all the while taking notes. Robert is a skilled speaker with a rapier wit!"

Robert Herjavec is one of North America’s most recognisable business leaders. He is a dynamic IT entrepreneur and leading participant on ABC’s Shark Tank.

Robert was born in Eastern Europe. Leaving his former home, he arrived in North America on a boat with his parents after escaping Communism in the former Yugoslavia. Herjavec’s drive to succeed has led him to achieve a better life for himself and his family.

Robert is a serial entrepreneur who has built and sold several IT companies to major global brands including AT&T. In 2003 Robert founded Herjavec Group, and it quickly became one of North America’s fastest growing technology companies. Today, Herjavec Group is recognized as a global leader in information security specializing in managed security services, compliance, incident response and remediation efforts for enterprise-level organisations.

His inspiring books, Driven and The Will to Win were simultaneously Top 10 Bestsellers that earned him the title of “Best Selling Author”. Robert’s latest book is “You Don’t Have to Be a Shark: Creating Your Own Success”.

Robert has a passion for racing cars and during recent years has competed for Herjavec Group Racing in the Ferrari Challenge North America Series. He achieved multiple podium wins and in 2011 won Rookie of The Year.

Herjavec believes that “You have to stay laser-focused when driving a car over 200 miles an hour and the same approach is required when growing a business in today’s world of rapidly changing technology.”

As a dynamic keynote speaker, he engages his audience with his motivational business advice. Robert also shares his expertise with other entrepreneurs as a leading “Shark” on ABC’s Emmy Award-winning weekly show, Shark Tank.

The Will to Win

Anyone can succeed, as long as they’re willing to take chances, control their future and stay true to their vision. Robert Herjavec will reveal the secrets and sales tips that took him from waiting tables to growing his nascent technology company into a world-class conglomerate. He shares life principles that are as valuable in the living room as they are in the boardroom.

Technology is constantly transforming, creating new possibilities and risks in the business world. Robert Herjavec will explore the evolving technology trends, and rising cyber security threats we face personally and professionally on a daily basis.
He shares advice on how we can all adapt to the pace of change.