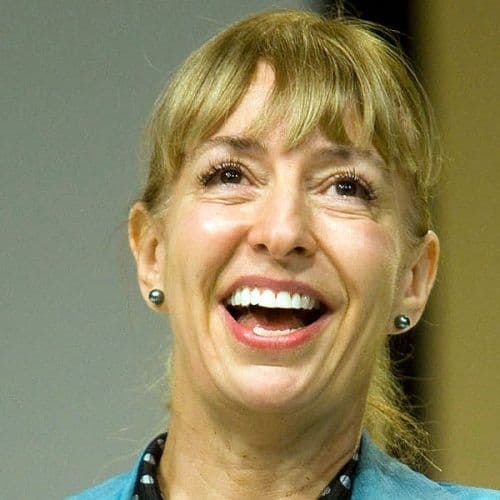 Neuroscientist who specialises in ideas about consciousness and identity

Understanding the human mind and how it is evolving, bears relevance to audiences right across the public and private sector – from solving workforce issues, nurturing leadership and inspiring creativity, to understanding the consumers of the future.

Susan Greenfield has delivered captivating keynote talks, lectures and after dinner speeches for organisations across a wide variety of sectors including finance, technology, human resources, media and education.

Susan was both an undergraduate and graduate at Oxford University, taking a DPhil in the Department of Pharmacology in 1977. She subsequently held research fellowships in the Department of Physiology Oxford, the College de France Paris, and NYU Medical Center New York. In 1985 she was appointed University Lecturer in Synaptic Pharmacology, and Fellow and Tutor in Medicine, Lincoln College, Oxford, before promotion to a University Professorship in 1996. From 1998 to 2010 she served as Director of the Royal Institution of Great Britain, a post held jointly with her chair in Oxford. She is now CEO of a biotech company which she founded in 2013 to develop a disruptive approach to Alzheimer’s disease based on her research exploring novel brain mechanisms linked to neurodegeneration,

Greenfield has been awarded 32 Honorary Degrees from British and foreign universities and in 2000 was elected to an Honorary Fellowship of the Royal College of Physicians. Further international recognition of her work has included the ‘Golden Plate Award’ (2003) from the Academy of Achievement, Washington, the L’Ordre National de la Légion d’Honneur (2003), from the French Government, and the 2010 Australian Medical Research Society Medal. She was awarded a CBE in the Millennium New Year’s Honours List, and was granted a non-political Life Peerage in 2001. In 2004 and 2005, she was ‘Thinker in Residence’ in Adelaide, reporting to the Premier of South Australia on applications of science for wealth creation. She served as Chancellor of Heriot Watt University 2005- 2012, and in 2007 was elected into the Fellowship of the Royal Society of Edinburgh. From 2014 – 2016 she held an annual Visiting Professor at the Medical School, University of Melbourne.

Greenfield also studies the physical basis of the mind: in 1995 she published her own theory of consciousness Journey to the Centres of the Mind (1995), which was developed substantially in The Private Life of the Brain (2000). Meanwhile, her book The Human Brain: A Guided Tour (1997) ranked in the British best-seller lists, and is still in print as a popular introduction to the brain for non-specialists. It was followed by Tomorrow’s People: How 21st Century technology is changing the way we think and feel (2003), which explored human nature and its potential vulnerability in an age of technology. These ideas were expanded in her later book, ID: The Quest for Identity in the 21st Century (2009). In addition she has written a novel ‘2121: A Tale form the Next Century’, published in 2013, which describes a dystopia century ahead in the future The theme of unprecedented changes to contemporary human cognition, arguably comparable in its significance to Climate Change, was briefly explored in a monograph You and Me (2011), and was developed further in an in-depth exploration of the impact of technology on the brain in ‘Mind Change: How 21st Century Technology is leaving its mark on the brain’ ((2014). Her latest book ‘A Day in the Life of the Brain: Consciousness from Dawn ‘til Dusk’ was published by Penguin in October 2016.

As a result of her original background in classics, Greenfield held the Presidency of the Classical Association for 2003 – 2004 and in 2010 was elected to a Fellowship of the Science Museum> From 2000 she was a Forum Fellow at the World Economic Conference at Davos for ten years. In 2002 she authored the Greenfield Report SET Fair: A Report on the Retention and Recruitment of Women in Science, Engineering, and Technology. Greenfield has been profiled in a wide range of papers and magazines, voted one of the 100 most influential women in Britain by the Daily Mail in 2003, and ‘Woman of the Year’ by the Observer in 2000. In 2014 she was included in Debretts ‘Top 500’ of the most influential people in Britain today.

How the brain works

The future of the mind

The neuroscience of creativity