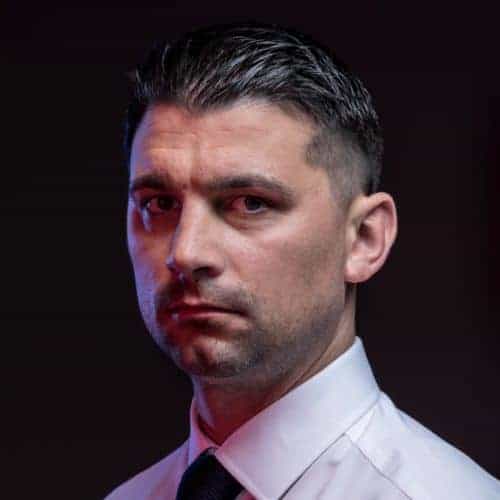 Famed for starring in Channel 4’s Hunted and Celebrity Hunted, Ben Owen is a training and development expert with extensive knowledge in cybersecurity, covert operations and counter fraud. With previous experience working in Government security and for the RAF, Ben is now booked as a speaker for a range of corporate events to help them better their cybersecurity practices and risk management.

"I just wanted to let you know Ben was a huge hit yesterday and was a real pleasure to have! He genuinely is a lovely guy and even managed to have a few gins with us after his talk – I am sure he was parched answering all of the questions he had from our audience, which is really great as it means our guys were clearly engaged. We all loved him and he is absolutely hilarious, so thank you for introducing us. Thank you again for all of your efforts - great team!"

"Ben was really liked! He really grabbed everyone’s interest! Thank you so much for all your help!"

"We didn’t think a virtual talk would be as engaging, Wow – we were wrong! Top class"

"I wanted to say a huge thanks from the Dicker Data team – that was an awesome presentation. Ben's presentation was direct – straight to the point and set things up perfectly for our other speaker, Corien."

Ben Owen is a global ‘hunter’ featuring in the Australian, British and U.S. versions of the hit TV show called ‘Hunted’. The show has been airing for over 6-years and now even has celebrity versions. Ben features as the Head of Intelligence in his recent production due to air on Channel 10 this year in Australia, and he was previously ‘The Boss’ on the U.K. version. Ben assimilates vast amounts of intelligence and turns it into actionable tactical plans to ensure the success of the ‘hunters’. The show has been aired across the world and is growing in strength and popularity. Ben also appears on a number of other TV productions and news channels discussing operational and security issues throughout the globe.

Ben is also an internationally recognised expert in covert operations, surveillance and online investigations with over 17 years’ experience working at the very height of national security, military operations and now the private sector. Ben’s experience is leading large covert operations across the U.K. and abroad to combat counter terrorism, counter proliferation and counter espionage operations and attacks against the U.K. and its allies. Ben’s main role was to lead, direct and manage covert operational teams to gather intelligence against individuals and groups of national security in very high paced and pressured environments. Ben was integral in thwarting a number of high-profile terrorist cells and attack planning operations.

Prior to joining the British intelligence services, Ben was a Sniper in the British Forces.  Ben served in Cyprus, Kuwait and also deployed on the first missions over the border into Iraq in GWII, aged just 19-years old.

Ben works as a cyber security and intelligence expert and consults across the globe on how to utilise and leverage intelligence sources in investigations and how to keep yourself safe in the digitally complex and vulnerable world we live in.  He also discusses threat landscapes in the digital and physical space and how remote work forces can stay safe online.

Ben’s keynotes are delivered in a highly engaging and enthusiastic way that fully engages audiences into whatever the subject is. From growing up in poverty and starting his career as a cleaner cleaning the school he studied in, to starring in a global TV show, he really does have many topics covered, from resilience and determination, leadership, cyber security, intelligence operations, ‘Hunted’ the global TV brand and much more.

Ben provides an incredible overview of the concept and the thrill of the ‘chase’. He discusses mindsets, what makes good hunters and fugitives alike and whether you can really ‘disappear’ in today’s surveillance states.

How safe are you online?

Ben demonstrates a live hacking session where he illustrates just how much data we all give away each day. From leaving your house for work in the morning to the moment you return, you leave 100’s of digital breadcrumbs to be found by the bad guys.

Digital data in the modern world

Ben discusses how the digital landscape has changed significantly post pandemic. Companies are now mostly remote, around 75% in fact, but with remote work forces comes danger, but how do we stay safe?

Ben has been a leader since the age of 19 where he was thrusted into leading sensitive military operations as a sniper. He then led operational teams to gather intelligence on some of the world’s most dangerous people. He will discuss numerous situations where leadership skills have been tested and impart knowledge and experiences.

In a digitally complex and dangerous world, the rise of cyber-crime is huge. Ben discusses how we can all remain safe and spot the signs of a cyber-criminal attempting to hack into your digital life.