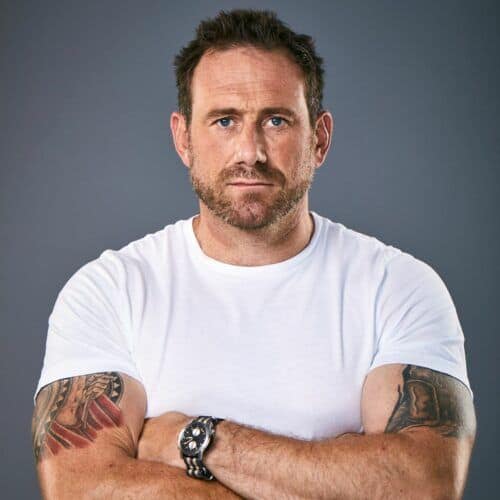 Jason is also trained as a combat swimmer, demolitions expert, Special Forces dog handler and jungle survival expert. After leaving the Special Forces, Jason moved in to the TV and Film industry, initially using his wealth of experience in the Special Forces to support production crews who were working in environmentally hostile areas, such as the jungle, the Arctic or the desert. It was during this period that Jason was part of the team of divers who found the lost treasure of Captain Kidd – one of the most prolific pirates of the 17th century – just off the coast of Madagascar.

Jason now stars in Channel 4’s hit series SAS: Who Dares Wins in both the UK and in Australia; putting members of the public through the SAS Secret Selection in the ultimate test of their physical and, more importantly, psychological resilience.

The start of the Jason Fox franchise began in 2018, with the ground-breaking series Meet The Drug Lords: Inside the Real Narcos, hailed as Channel 4’s flagship show of that year. Taking over 2 years to shoot with unique editorial and graphic scenes, the show sees Foxy enter the cartel strongholds of Mexico, Colombia and Peru, exposing the most formidable and dangerous drug gangs from a rarely seen perspective. The crew consisted of just 4, including Jason, who due to his vast experience was also an invaluable producer on the series.

‘An excellent, unflinching film about Mexico’s Sinaloa cartel, the most powerful in the world’ – The Independent

Earning front covers, critics’ choice across all the broadsheets and national coverage in print, digital and broadcast media, the series was one of the most downloaded programmes on All 4 of 2018, attracting a huge share of 16-24 year olds. Receiving critical acclaim and dubbed ‘The Narcos Whisperer’, Jason has leapt to the forefront of documentary film making & presenting.

‘Jason Fox’s sphincter-tightening three-part documentary…Bullets fly, men die in cold blood and the lives of the programme makers are put at risk’ – The Observer

Jason released his first book ‘Battle Scars’ –  the Sunday Times Bestseller in 2018 which tells the breath-taking account of his ‘rise, fall and recovery’ in the military as an elite operator. It highlights the gunfights, hostage rescues, daring escapes and heroic endeavours that defined his service and the very different kind of battle that awaited him at home. His second book, ‘Life Under Fire: How to Build Inner Strength and Thrive Under Pressure’ was released in hardback on the 15th October 2020. Having overcome more than his fair share of emotional and mental conflicts, Life Under Fire share’s the tools Jason has developed at the cutting edge of an elite military career and gives readers an insight on how to build resilience and inner strength to overcome life’s challenges.

A vivid, searing account of a life at war.’ – Bear Grylls on ‘Battle Scars’

On top of his TV work, Jason is in high demand in the corporate world through which he provides keynote speeches and live experiences. He regularly leads and motivates teams in pressurised environments through ‘Break-point’- his co-founded company alongside fellow SAS co-star and ex-special forces soldier, Ollie Ollerton. They design packages for the ultimate team building exercise, including being put through challenging and gruelling Special Forces Drills.

Charity work is also something close to Jason’s heart, he holds a new world record for rowing across the Atlantic in aid of the NSPCC and in 2018 led a group of civilians to the North Pole for Borne charity. Jason is also co-founder of charity Rock 2 Recovery, which helps preserve lives of distressed servicemen, veterans and their families, and an ambassador for Veterans 4 Wildlife for the prevention of wildlife crime. Last summer, Jason also completed an epic 2000 mile charity expedition across Alaska and the river Yukon, raising money for Rock 2 Recovery through the Royal Marines Charity and for the Special Boat Service Association.