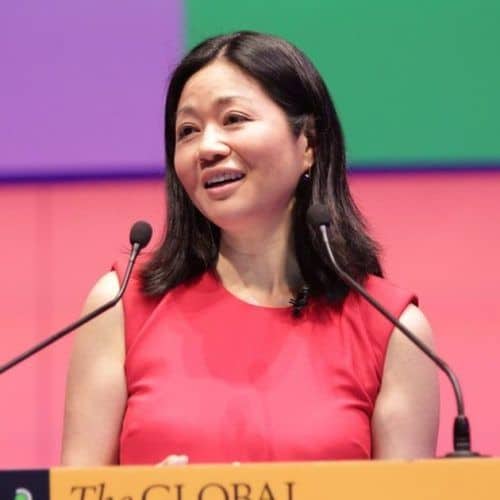 Linda Yueh is an economist and commentator on global economic issues. The current economics correspondent for Bloomberg Television, she is one of the most respected keynote speakers and authority on effects of globalization and drivers of economic growth and development.

"A knowledgeable economist who is a great presenter. She clearly knows her subject well."

"I want to personally thank Dr. Yueh for the fantastic role she played in moderating no less than three of the sessions this year at the 17th WTTC Global Summit in Bangkok. Her continued contribution, level of questioning, and insight into the issues and individuals on stage is extremely valued and it added immensely to the success of the entire Summit."

"We have had a huge amount of compliments from attendees about Dr. Yueh's speech and Q&A, and we thought she did a fantastic job."

"She is an excellent speaker, she knows her subjects perfectly, able to answer any question, and on top of that a very nice and accessible person to work with."

"Very knowledgeable, kept delegates focused on what could have been quite a dry subject! Analysis of future economic trends and those relating to the advertising industry was insightful but raised nothing that was really unexpected."

"Linda is a fantastic speaker with a great command of her subject. She is highly personable and very approachable."

She is a TV and radio presenter, including for BBC Radio 4 and the World Service, as well as having fronted BBC TV series, such as The New Middle Class, Next Billionaires, and Working Lives.

Dr. Yueh is Chair of the Royal Commonwealth Society and Non-Executive Director of Rentokil Initial as well as Trustee of the Coutts Foundation and Malaria No More UK. She serves on the Policy Committee of the Centre for Economic Performance (CEP) at the London School of Economics and is a Fellow (FRSA) of the Royal Society of Arts (RSA).

She is a widely published author and Editor of the Routledge Economic Growth and Development book series. Her latest book, The Great Economists: How Their Ideas Can Help Us Today is published by Viking/ Penguin Random House (The Times’s Best Business Books of the Year) and What Would the Great Economists Do? How Twelve Brilliant Minds Would Solve Today’s Biggest Problems (Newsweek’s Best Books of the Year (so far)) by Picador/ Macmillan in the U.S. She is represented by Janklow & Nesbit.

Previously, she was Chief Business Correspondent for BBC News and host of Talking Business with Linda Yueh for BBC World TV and BBC News Channel based in Singapore. She had been Economics Editor and anchor at Bloomberg TV in London. Previously, she was an attorney at Paul, Weiss, Rifkind, Wharton & Garrison in New York.

She was previously Co-Chair of the Global Cities Business Alliance (GCBA) of London First; Board Member of London & Partners; Advisory Board Member of The Official Monetary and Financial Institutions Forum (OMFIF); and advisor to the British Chambers of Commerce (BCC).

Ideas That Have Changed How We Live

Which economic ideas have most influenced the economy? Dr. Yueh discusses ideas from her book, What Would the Great Economists Do? She covers the battle of ideas through history, such as how the market economy overcame socialism in the 20th century and why we are now at a crossroads. The consensus about how to run the economy has broken down–Dr. Yueh explores why, and most importantly, she fashions solutions to reshape economic policies to make them work better for the 21st century.

What are the economic and geopolitical trends that are shaping the world? What should we look out for in terms of opportunities and risks? Dr. Yueh discusses the U.S., China, EU, emerging economies, and more. We live in an age of prosperity, which is likely to become a second golden age (the first was during the 1950s when Americans became prosperous). The emergence of a new global middle class and the digital era means there are more opportunities than ever before. But are we ready to seize them?

The U.S., China, Brexit, the EU, emerging economies (e.g. Asia). Dr. Yueh can discuss one of these countries or several of them in pinpointed economic forecasts. What should we expect in the American/Chinese/British/European economies? What drives innovation in the digital age in America? Can China grow rich? What will Brexit mean? Will the euro last? Will developing Asian/emerging markets continue to grow well?

Currencies, Risk, and the Financial Market