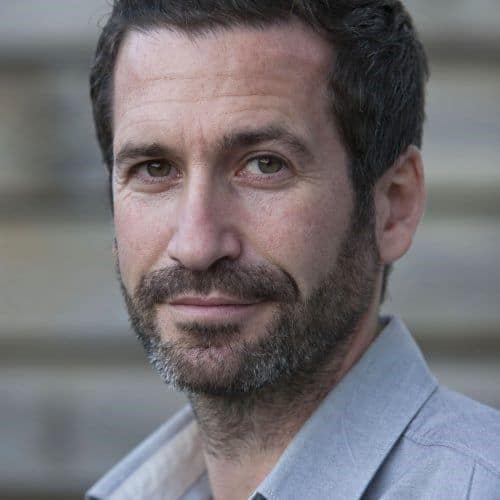 Oliver Heath is an industry recognised expert in Biophilic Design, Sustainable Architecture and Interior Design; he strives to create human-centred spaces that are proven to benefit the health and wellbeing of building occupants.

"Really happy, very positive feedback from delegates regarding his talk. Many thanks"

"We had the pleasure of having Oliver Heath presenting a seminar during our internal Sustainability Exhibition. The issues of sustainability and biophilic design were beautifully outlined by Oliver with all our questions being answered in a professional and friendly way."

"So inspiring listening to Oliver Heath."

With over 25 years of industry and media experience as well as a wealth of research into the topic, Oliver Heath has firmly secured his spot as a thought leader within the industry.

Oliver is working on a range of prestigious projects for organisations such as The Crick Institute, Booking.com, Bloomberg and Interface from his design practice Oliver Heath Design based in Brighton. The practice combines interior architects and psychology and sustainability researchers – combining an evidence base of research with cutting edge design thinking. As a result, he spends much of his time lecturing Architects, Interior Designers and built environment professionals around the world about Health and Wellbeing and Biophilic Design.

Over the last 5 years Oliver has presented over 300 wellbeing CPDs (Continuing Professional Development) to architects and interior designers and has acted as spokesperson for the Department of Energy and Climate Change, The Energy Saving Trust and the Waste Recycling Action Group

Oliver studied architecture at Oxford Brookes University and then completed a postgraduate in architectural studies at University College London.

He worked in exhibition and set design before winning the BBC’s Young Designer of the Year in 1998. He set up the interior and architecture practice Blustin Heath Design, with Nikki Blustin, creating practical, beautiful sustainable designs for Barratt Homes, Bio Regional, ING Real Estate and Islington Council, designing their Sustainable Living Centre.

On television Oliver has been involved in the BBC’s Home Front. Changing Rooms and Heaven and Earth; Channel 4’s House to Home and ITV’s Front of House. In all his programmes he incorporates sustainability and shows people how they can make it part of their lifestyles without compromising on style. In Dream Homes for The Discovery Channel, Oliver followed couples building new homes. Most recently Oliver has acted as a guest designer to the ever popular BBC DIY SOS, working alongside the regular team.

Over the years Oliver has been a regular content contributor for publications such as The Observer, Grand Designs Magazine, Friends of the Earth, Earth Matters and House Beautiful Magazine. He has also released three books about home design & style – Oliver Heath’s Home Book, Front of House, and Urban Eco Chic which sold over 30,000 copies in six languages.

In 2006 Oliver co-founded EcoCentric.co.uk, an online ethical retailer dedicated to interiors products reflecting Oliver’s style. It was set up as a response to a need for beautifully designed, coordinated sustainable products for the home but after 4 years of successful trading Oliver sold EcoCentric to a competitor.

He has recently completed a full environmental refurbishment of his home in Brighton, showcasing the practical and aesthetic benefits low energy living, reuse and ingenious recycling. The house was awarded Super Home status by the Sustainable Energy Academy for reducing its carbon emissions by over 75% and in March 2011 was awarded the British Institute of Interior Design’s Retrofit award.

Since moving to Brighton and having children Oliver has been promoting his new design company, Heath Design Ltd.