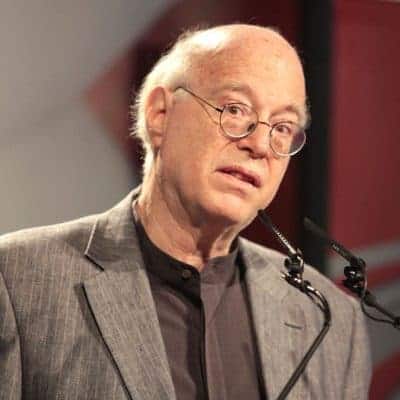 Richard Sennett grew up in the Cabrini Green housing project in Chicago. At an early age he became engaged with music, particularly the cello, attending the Juilliard School in New York, where he worked with Claus Adam, cellist of the Juilliard Quartet.

A hand injury put an end to his musical career. He briefly attended the University of Chicago, then entered Harvard, studying history with Oscar Handlin, sociology with David Riesman, and philosophy with John Rawls.

Over the course of the last five decades, he has written about social life in cities, changes in labour, and social theory. His books include Families Against the City, The Hidden Injuries of Class, The Fall of Public Man, Authority, The Corrosion of Character, Respect, The Culture of the New Capitalism, Together, The Craftsman, and Building and Dwelling.

He has had a public career, first as founder of the New York Institute for the Humanities, then as President of the American Council on Work. For the last three decades, he has served as a consultant to various bodies within the United Nations; most recently, he wrote the mission statement for Habitat III, the United Nation’s environmental congress. Five years ago, he created Theatrum Mundi, a research foundation for urban culture, whose board of trustees he now chairs.

Among other awards, he has received the Hegel Prize, the Spinoza Prize, an honorary doctorate from the University of Cambridge, and the Centennial Medal from Harvard University.

In private life he is married to the sociologist Saskia Sassen. He gardens and cooks, as well as continues to play the cello.