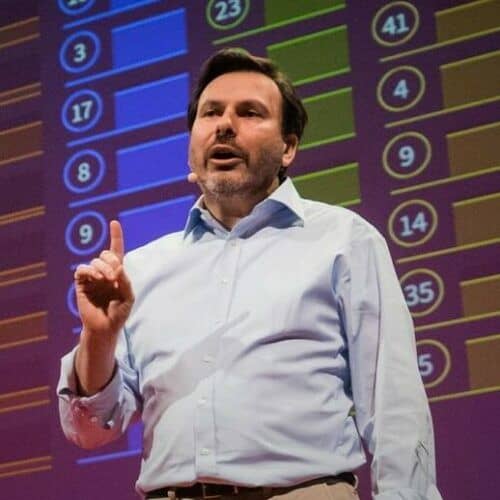 Founder of the Good Country movement, highly in demand for his cutting-edge presentation, ‘Making the World Work’

Simon Anholt is an independent policy advisor who, over the last twenty years, has worked with more than fifty Heads of State, Heads of Government and administrations of nations, cities and regions across the world. His expertise is in developing and implementing strategies for enhanced economic, political and cultural engagement. His presentation, ‘Making the World Work’ was his most-booked talk throughout 2017, leading to engagements across 14 countries.

Every year since 2005, Simon Anholt has published two major global surveys that track public perceptions of countries and cities. This research has collected and analysed over three hundred billion data points.

He is the author of five books about countries, cultures, globalisation and the role that they play in the world as well as the founder and emeritus editor of Journal of Place Brand and Public Diplomacy, an academic journal on the same subject.

In 2014, Anholt used his extensive experience of working with diverse countries, regions and cities to create the concept of “The Good Country”, a project that aims to help countries work more closely together by encouraging their leaders to think about the global impact of their actions. The Good Country is a catalyst for tackling global challenges such as climate change, poverty, migration and terrorism.

In 2016, he launched the “Global Vote”, another project which enables anyone in the world to vote in another countries elections with the selection of the candidate based on who will do more for humanity and the planet.

Anholt is also Honorary Professor at the University of East Anglia and, recently, has chosen to give up nearly all of his advisory work in order to focus on growing the Good Country movement.

Is now his most booked talk of 2017 and he has enjoyed giving it in 14 countries (short and long forms).

Big Data and the Fate of Nations

The Anholt-GfK Roper Nation Brands Index, one of the biggest social surveys ever conducted, has since 2005 collected more than 400 billion data points from a sample representing nearly 70% of the world’s population. This unique resource reveals extraordinary findings about why people admire certain nations and cities more than others, and what this tells us about the global balance of power, the future of capitalism, the way that global culture evolves, how the world is actually becoming slightly ‘gooder’ every year. It also reveals some startling insights into the best ways of tackling the huge challenges that face humanity today.

Is the runner-up, and the appetite for this new topic of his has been particularly popular with corporations in the finance/insurance and healthcare sectors, as well as government.

Competition vs. Collaboration: Time to Adjust the Balance

Simon Anholt’s 2-year analysis of the 200 billion data points of his high-profile national image survey, the Nation Brands Index, produces a surprising finding: collaboration makes nations more competitive. And the same holds true for corporations. This is good news in an age where companies and countries need to work more closely than ever before to address global challenges: it turns out that being more collaborative actually makes organisations more competitive. Simon Anholt shares some unique insights into the real mechanisms behind the principle that doing well and doing good are now the same thing.

Brand as if reality mattered

Perceptions are so important in the modern world – for corporations, nations, even people – it’s not surprising that image enhancement has become a huge industry. Yet because perceptions live in the mind of the consumer, not in the office of the brand owner, they are almost impossible to manipulate, and most of the money spent on branding every year is utterly wasted. Yet a good reputation can be earned, even if it can’t be constructed – and the research proves that the quickest way of earning and retaining a good reputation is by doing things for people that make them feel glad you exist.

Education: Our inoculation for a better future

Simon Anholt’s Good Country trains ordinary people around the world to make their countries, cities and companies focus as much on co-operation and collaboration as on competition. He is ‘inoculating’ future generations against the problems that we and our ancestors have produced. Anholt will show how every business and institution can participate in this inspiring project through very simple actions and in turn, without fail, benefit from its involvement.