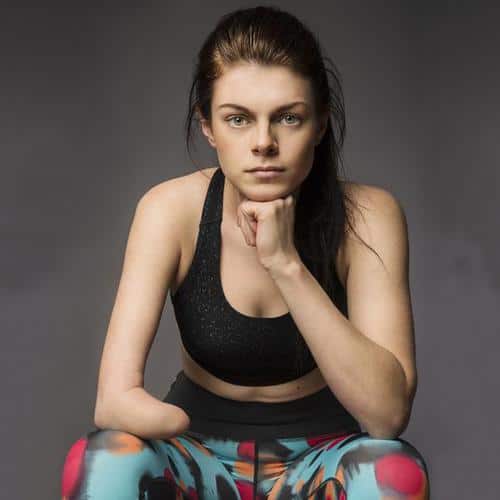 Lauren is an elite paratriathlete who won silver medal at Rio 2016 Paralympic games and has previously won both the World and European champion titles.

Lauren Steadman was born missing her lower right arm, but this has only spurred Lauren on to be the best she can be and she relishes the challenge of overcoming these barriers.

Her passion for swimming started when she was just four years old and 11 years later when Lauren turned 15, she represented Team GB as a Paralympic swimmer in Beijing. Lauren also competed in London 2012 as a swimmer, but has since specialised in paratriathlon and represented Team GB in the sport’s first entry to the Paralympic Games in Rio 2016, where she won silver.

Her dedication and drive in all aspects of her life have also seen her attain a Psychology degree and a Masters in Business from Portsmouth University.

Outside of studying and competing at the highest level, Lauren loves to bake, salsa dance and notably reached the semi-final of the BBC’s Strictly Come Dancing in 2018 and most recently competed on Channel 4’s SAS: Who Dares Wins facing a gruelling course in the challenging terrain of Scotland’s rugged West Coast.