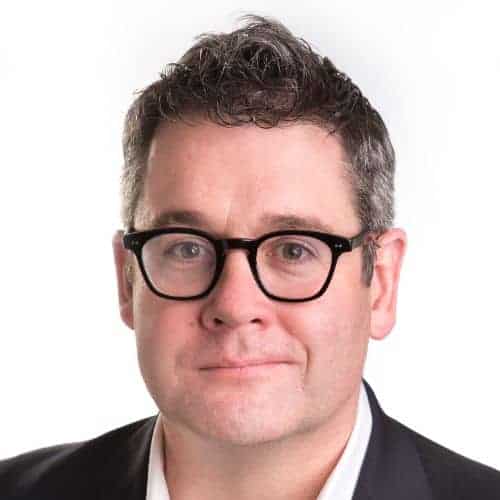 Marketing & branding expert with worldwide recognition in his field

A marketing and branding expert for the modern age who has inspired students and businesses alike with his dedication to his work as a columnist, consultant and professor.

"Ritson is a world class speaker. Among the best I’ve seen. And I’ve organised, and attended, a LOT of good conferences around the world. Outspoken, but with an authoritative, and authentic point of view, Mark completely holds and entertains the audience. Every time he’s spoken at our events, he’s delivered some of our highest post-event feedback scores of all time. As a speaker, he is a huge drawcard for those interested in the world of marketing. For me as an event organiser, there’s no better feeling than watching venue staff frantically putting out extra chairs because the crowd is streaming in to see Mark speak."

"Mark is an outstanding communicator with deep knowledge and experience in marketing and branding. A pleasure to be in his audience."

"Mark is an excellent practitioner of branding and one of the most talented experts I have met in communicating his thoughts. He has very insightful and original ideas and keeps his audience engaged at all times. His knowledge of branding and marketing overall is a valuable asset for clients and peers alike."

"Mark was sensational… from minute one was full of energy, knowledge, provocation and counsel. He was the highest rated speaker in our post conference survey. Our team genuinely loved him and were made better for everything he shared."

"Mark is truly one of the strongest brand strategists that I’ve had the pleasure to work with and learn from. Phenomenal speaker/presenter and more importantly a true leader . . . someone who can manage and direct a highly complex initiative among a diverse group of individuals with varying objectives and still reach a positive, common goal."

"We requested Mark speak to senior HR Directors of leading Australian brands on the topic of Employer Branding at our Talent Conference. Mark did a terrific job and was highly entertaining and informative. A great teacher of Consumer and Employer Branding."

"Mark is quite simply the best conference speaker/business school lecturer on marketing I have ever heard (and I have heard a great many). He is provocative, challenging, practical, down to earth, funny, sharp, and full of one-liner insights which stick in the mind a long time. His illustrations of the good, mediocre, bad and terrible in marketing are vital for every marketing executive to learn from. I had the privilege to work with him on several programmes at London Business School."

"I don’t often rave about fellow speakers. But Mark Ritson is a fabulous professor and speaker, quickly capturing the imagination and yet conveying practical, tangible strategies and tactics with humour and immense insight. I’ve never seen anyone capture the strategic elements of brand and branding with a strong call for personal accountability in the same way that Mark does. How do I know this? Well, I worked with Mark on executive education programmes at London Business School, where we worked with demanding managers from dozens of global corporations. Almost every single person we worked with rated Mark the best of the best. If you want to educate, inform and even inspire your audience – at whatever level, in whatever profession, in any country – call Mark Ritson. Whether you’re looking for a week-long executive education programme or a 1-hour keynote speech, I’m sure Mark will help you the same way he helped me. But don’t wait too long. I know he gets booked up ages in advance. If you want to ensure your next event is a huge success call him now."

"Thought-provoking, colourful and rigorous in his analysis, Mark is everything you need from a conference speaker. His consensus- busting keynotes at Marketing Week Live have always been brilliantly received and very popular."

Mark Ritson has a PhD in Marketing and spent 25 years working as a marketing professor. He was an Assistant Professor at London Business School and the University of Minnesota, an Associate Professor and then Adjunct Professor at Melbourne Business School, and Visiting Professor at MIT Sloan and SMU. Mark’s MBA teaching won a ton of prizes including Best Teacher at LBS, MIT & MBS.

For thirteen years – from 2002 to 2015, he served as the in-house brand consultant for LVMH – the world’s largest luxury group – working in Paris with senior executives from brands like Louis Vuitton, Dom Perignon and Hennessy.

Mark has been a columnist for (gulp) 20 years, writing a weekly column for Marketing Week. On four occasions he has won Columnist of the Year at the PPA Press Awards, the highest award for magazine journalism in the UK. He also has been the British Society of Magazine Editors Business Columnist of the Year twice too, in 2018 and 2022. Mark’s more scholarly publications include articles in the Sloan Management Review, Harvard Business Review, the Journal of Advertising and the Journal of Consumer Research.

He was a Thouron Scholar and spent 1995 at Wharton. He was the recipient of the Ferber Award in 2000 for my doctoral thesis. His co-authored pricing research was cited by George Akerlof during his 2001 Nobel Prize acceptance speech. In 2018 AdNews rated him one of their “Power 50” and he made SmartCompany’s top ten business thinkers list for Australia. The AMI gave him the Sir Charles McGrath Award, the highest honour for marketing in Australia. He gave the 30th Anniversary Levitt Group lecture for the Chartered Institute of Marketing in 2019 and the Ogilvy lecture for the Marketing Society a year later.

A combination of intuition, experience and innovation makes Mark Ritson’s marketing advice unmissable for any forward-thinking business. He can engage and educate teams with any experience level.

In this applied and entertaining session Mark Ritson looks at the challenge of briefing. He examines why it is so important and then looks at why 90% of marketers do it so badly. He concludes with tips to be in the 10% of marketers who do brief well.