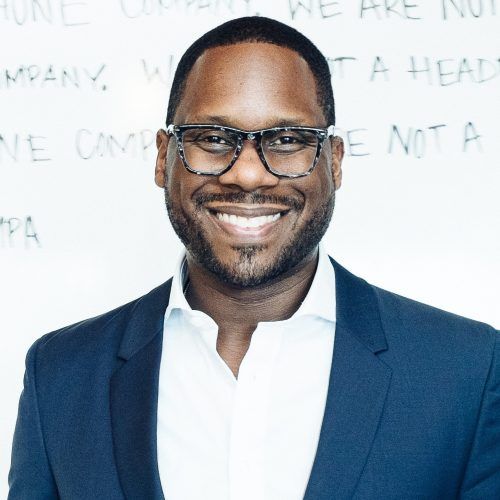 Under Johnson’s tenure, Beats grew fOmar Johnson is a top marketing and branding keynote speaker, entrepreneur, former CMO at Beats by Dre, and former VP Marketing at Apple. Adweek named Johnson a “Brand Genius,” and Business Insider named him one of the “Most Innovative CMO’s.”rth America, UK, France, Germany, South Korea and Singapore.

"Omar is a highly engaging presenter who will share with Domopalooza attendees how curiosity and creativity turned headphones from a commodity product into an experience, and how insights can drive influence. We're thrilled to bring his experience to the Domopalooza stage."

"Omar Johnson was my favorite keynote speech. I could relate on so many levels, especially fear being a great motivator in never allowing you to get complacent. I also loved the raw power of the presentation and how personal it was."

"I worked with Omar during the launch of Nike+ and Nike Sport Music marketing campaigns. Omar's intelligence, clear communication, direction, passion and creativity are unmatched. In the simplest terms, Omar is a pleasure to work with and is a true treasure within this industry."

"My highlight for Domopalooza Day 1: Omar Johnson. I'm in awe of the marketing strategy for Beats by Dre."

"Omar Johnson is a fantastic speaker and extremely gracious. We gained valuable insights that we will use as an organization moving forward. His contribution to our event made it a great success"

Omar Johnson is a marketing innovator in the art of building world-class brands.. As former CMO of Beats by Dre and VP of Marketing at Apple, throughout his career, Johnson has led all facets of marketing, ranging from brand development and positioning to advertising and global digital marketing.

Under Johnson’s tenure, Beats grew from $20 million to a $2.0 billion dollar category leader, becoming the #1 premium headphone in over 25 countries, which led to the subsequent purchase by Apple for $3 billion. Adweek named Johnson a “Brand Genius,” and Business Insider named him one of the “Most Innovative CMOs.” Additionally, Johnson has worked on hundreds of winning marketing campaigns while at international brands such as Nike, Coca-Cola, Kraft Foods, and Campbell Soup. Johnson produced some of Nike’s most memorable TV commercials including “Rise,” starring LeBron James, “All Together Now,” featuring Kobe Bryant, and “The Most Valuable Puppets”.

Since Apple, Johnson has founded ØPUS United, a modern brand management company comprised of a multi-disciplined collective of award-winning executives, athletes, strategists, creatives, and musicians, who understand the anatomy of world-class brands. Through his work with ØPUS United, Johnson has also been actively involved in developing initiatives, such as We The People and We Got Next, and authored Dear White Corporate America to encourage conversations around racial equity and the empowerment of younger generations to take action through polling, voting, and representation within the government.

Johnson is from Brooklyn, NY. He received a BS in Biology and Chemistry from Georgia State University and an MBA from Goizueta Business School at Emory University.

Diversity in business: meeting people “where they are”

Many leaders and business owners are at a loss on how they can concretely affect change and grow their business in regards to diversity. Join us for a conversation with Omar Johnson, former cmo at beats by dre, and former vp of marketing at apple, inc. As he shares his thoughts on how we can support our black employees, partner with the communities they serve, and make more conscious decisions in our marketing and branding efforts.

Leadership: meeting people “where they are”

The idea of the majority office culture is changing. Instead of expecting everyone to fall in line, employees are encouraged to bring their individuality to work, such as their culture, gender, or sexual orientation. While celebrating and encouraging individual differences is good for breaking groupthink and innovating, it is also hard to manage as a leader. In this talk, Omar Johnson discusses the challenges and benefits of meeting people where they are. Audiences will come away with an understanding of employee differences, which can provide for a better work environment that enriches the company culture and the bottom line.

Marketing brands with authenticity and emotion

Big companies spend millions of dollars on advertising campaigns to drive brand awareness, but Omar Johnson was able to make beats headphones a viral social media phenomenon and an international success on almost no budget. Johnson learned the key to building great brand awareness was to listen, be curious, and to use truth and emotion to connect to the audience. In this talk, Johnson will share his experiences of creating emotional connections to a brand through innovative and unconventional marketing techniques.

When dr. Dre and Jimmy iovine created beats in 2006, their goal was to create a great sounding headphone. However, it wasn’t until Omar Johnson came along that beats became the most popular headphone for athletes and musicians. Johnson was able to turn a 180 million dollar company into a billion dollar enterprise through unconventional marketing tactics and his brand of insight, idea, execution and result. In his highly engaging talk,Johnson shows how he used curiosity and creativity to turn beats headphones from a commodity product into an experience and an international brand.

The best idea wins: how to work with the crowd, ignore the data, and use the art of listening to develop your best ideas

Marketing is about ideas and authenticity. When Omar Johnson took over the marketing for beats by Dre, he created a flat organization style where the best idea could win. He encouraged everyone to contribute ideas from the newest member of the team to the oldest. Instead of heavy data analysis, his team would talk to actual users of beats in the streets in order to find why and how people were using their headphones. The result was a billion dollar company and category leader. In this talk, Omar shares techniques from his experience on how to develop the best ideas.

The new rules of marketing: from influencers to ambush marketing

When beats by Dre headphones came into the market they faced competition from more established market leaders like bose. As the new kid on the block, Omar used new marketing techniques to gain market share, from giving well-known athletes free headphones to developing hangouts for Olympic athletes to drive buzz and desire for beats headphones. In this talk, Omar shows how your company can incorporate guerilla techniques to gain market share.