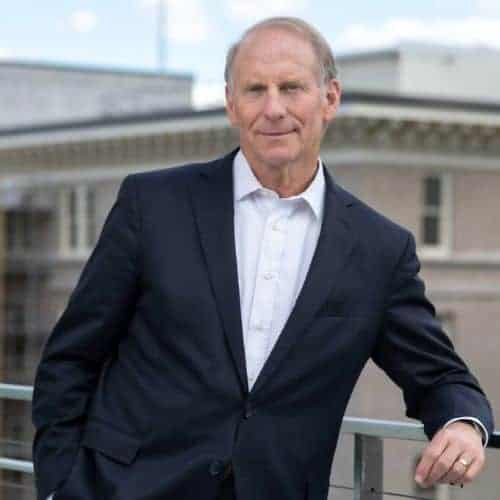 Dr. Richard Haass is in his sixteenth year as president of the Council on Foreign Relations, an independent, nonpartisan membership organization, think tank, publisher and educational institution dedicated to being a resource to help people better understand the world and the foreign policy choices facing the United States and other countries.

Dr. Richard N Haass is a veteran diplomat, a prominent voice on American foreign policy, and an established leader of nonprofit institutions. He is in his seventeenth year as president of the Council on Foreign Relations, an independent, nonpartisan membership organization, think tank, publisher, and educational institution — dedicated to being a resource to help people better understand the world and the foreign policy choices facing the United States and other countries.

In 2013, Dr. Haass served as the chair of the multiparty negotiations in Northern Ireland that provided the foundation for the 2014 Stormont House Agreement. For his efforts to promote peace and conflict resolution, he received the 2013 Tipperary International Peace Award.

From January 2001 to June 2003, Dr. Haass was director of policy planning for the Department of State, where he directed the policy planning staff and was a principal advisor to Secretary of State Colin Powell. Confirmed by the U.S. Senate to hold the rank of ambassador, Dr. Haass also served as U.S. coordinator for policy toward the future of Afghanistan and U.S. envoy to the Northern Ireland peace process.

Dr. Haass has extensive additional government experience. From 1989 to 1993, he was special assistant to President George H.W. Bush and senior director for Near East and South Asian affairs on the staff of the National Security Council. In 1991, Dr. Haass was awarded the Presidential Citizens Medal for his contributions to the development and articulation of U.S. policy during Operations Desert Shield and Desert Storm. Previously, he served in the Departments of State (1981–1985) and Defense (1979–1980), and was a legislative aide in the U.S. Senate.

A Rhodes Scholar, Dr. Haass holds a bachelor’s degree from Oberlin College and master’s and doctorate of philosophy degrees from Oxford University. He has also received numerous honorary degrees and was a member of the faculty of Harvard University’s Kennedy School of Government and Hamilton College.

Dr. Haass is the author or editor of fourteen books on American foreign policy and one book on management. His next book, The World: A Brief Introduction, will be published in May 2020 by Penguin Press.

Richard Haass covers where this pivotal conflict stands in all of its dimensions, including an account of why it came about when it did; an assessment of the strengths and weaknesses of the various US/Western policy responses, from military transfers and the strengthening of NATO to economic sanctions and energy shipments to Europe; a prediction of what is likely to come next on the ground given Ukrainian and Russian military strategies and capacities along with the consequences for diplomacy and Russia; a catalogue of the projected winners and losers and those in between; and, most importantly, an explanation of how this conflict will and will not change the 21st century world.

Introduction to the World

Visionary thinker Richard Haass delivers unparalleled insights that will help anyone, experts and non-experts alike, become more globally literate so they can better navigate our fast-changing world. Modeled on his book The World: A Brief Introduction, this presentation provides audiences with the essential background and building blocks needed to answer the critical questions generated by today’s headlines. With the tectonic plates of international relations constantly moving, this is a critical time for individuals, businesses, and organizations to understand what is taking place around the world, why it is taking place, and how it affects our lives and our work.

In this talk, Haass will elucidate the essential history, point out what makes each region of the world (and the most important countries) tick, analyze the most challenges globalization presents, and explain the ideas most critical for understanding international developments and why they matter.

The Economic and Strategic Consequences of Global Recession

Richard Haass looks at how political developments—for example, a crisis involving Iran or Pakistan or Russia—could make difficult situations far worse. He assesses existing policies and international institutions and what the US and others need to do to increase the odds of a sustained global recovery.

The principal characteristic of international relations in the 21st century is turning out to be nonpolarity. This is a world dominated not by one or two or even several states but by dozens of actors possessing and exercising various kinds of power. While the United States remains the single most powerful entity, many other states and non-state actors – ranging from China and India to foundations, media organizations, and terrorist groups – are on the rise.

Drawing on his groundbreaking article in Foreign Affairs, “The Age of Nonpolarity,” Haass explains the origins and consequences of a nonpolar world and outlines what the United States must do, both at home and on the international stage, to lead efforts to tackle the global challenges that are this era’s greatest threat to peace and prosperity.

Foreign Policy Begins at Home: The Case for Putting America's House in Order

The biggest threat to America’s security and prosperity comes not from abroad but from within. In this provocative and thought-provoking presentation modeled after his book, Foreign Policy Begins at Home: The Case for Putting America’s House in Order, Haass describes how the biggest threat to the United States comes from its burgeoning deficit and debt, crumbling infrastructure, second class schools and an outdated immigration system.

The result is a country less competitive and more vulnerable than it should be on the global stage. He proposes a new foreign policy of Restoration. At home, it would concentrate on restoring the economic foundations of American power. Overseas, it would stop trying to remake the Middle East with military force as was tried unsuccessfully in both Iraq and Afghanistan.

Instead, it would emphasize maintaining the balance of power in Asia, promoting economic integration and energy self-sufficiency in North America, and narrowing the gap between global challenges and global arrangements. Adopting Restoration will ensure the United States has the resources it needs to lead the world, set an example other societies will want to emulate, reduce the country’s vulnerability to hostile forces and fickle markets, and discourage would-be adversaries from mounting aggression. It will require hard choices, but hard choices are called for. At stake is nothing less than America’s future and the character of the coming era of history.

Doing Business in a Global World

International business leaders today face more complex risks and opportunities than ever before. They must navigate not only traditional business issues but also political ones, ranging from corporate social responsibility and climate change to political instability and backlashes against globalization.

Haass, president of the country’s most influential foreign policy organization and author of numerous books, including an acclaimed book on management, analyzes the environment in which today’s business leaders operate, one that is increasingly transparent, demanding, and crowded with a wide array of players. He draws on his experience at the top levels of government and working with business to offer lessons on how business can both meet challenges and seize opportunities in a global world.

President Trump comes to office facing an ever-growing and daunting slate of foreign policy challenges: a turbulent Middle East, including ongoing conflicts in Syria, Yemen, Libya, and Iraq; a global struggle against terrorism; nuclear weapon development in North Korea; a rising China; an increasingly assertive Russia; challenges to the European project; and the need to address global concerns such as climate change, cybersecurity, and the spread of nuclear weapons.

Formerly a senior aide to Secretary of State Colin Powell and before that to President George H. W. Bush, Haass explains the major issues facing U.S. foreign policy and outlines what the new Administration and Congress will need to do both at home and abroad to promote stability in the world.

A World in Disarray: American Foreign Policy and the Crisis of the Old Order

Things fall apart; the center cannot hold. The rules, policies, and institutions that have guided the world since World War II have largely run their course. Respect for sovereignty alone cannot uphold order in an age defined by global challenges from terrorism and the spread of nuclear weapons to climate change and cyberspace.

In this thought-provoking presentation rich in history and modeled after his book, A World in Disarray: American Foreign Policy and the Crisis of the Old Order, Haass describes the current world, along with how we got here and what needs doing. Haass shows that the world cannot have stability or prosperity without the United States and explains what the United States and the Trump administration need to do at home so that it can continue to act and lead effectively in the world.