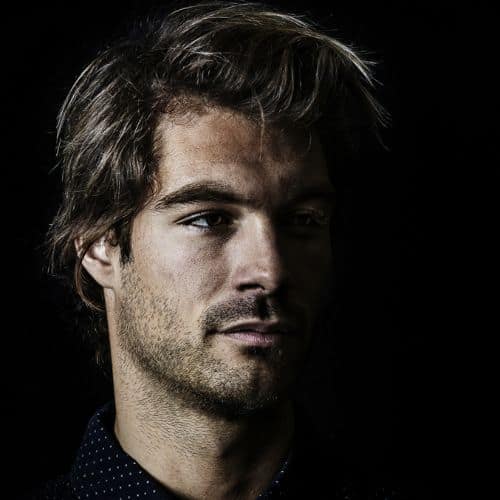 Showing that behind the impossible always hides a possible is the mission Axel Allétru has set for himself. He shares his life experience and his career as a high-level athlete in worldwide companies, to help people gain height, motivate themselves, develop team spirit and face new challenges with the right mindset.

"Axel did us the honor of speaking for the PREC, in front of the decision makers of Cambrai. Mental, courage and determination are great values that Axel represents and transmits. An example to follow, an inspiration for our personal and professional life. Personally, Axel is modest, friendly and generous. A beautiful meeting!"

After many titles of multiple European champion and junior BMX vice-world champion , Axel evolves and devotes himself to motocross. “My father had promised me that if I became European BMX champion, he would buy me a motorbike. Too bad for him, I had been European champion several times!”

As a professional rider, Axel is considered as a great hope for French motocross, senior category. He quickly rose through the national ranks to represent France at the MX2 World Championships. Unfortunately, his fall at the Latvian World Championship (2010) will decide otherwise and will mark a turning point in his life at the age of only 20 years old.

Having become a paraplegic and now a former motocross champion , Axel’s ambition is not to abandon the world of motorsport, that he loves so much! Axel did not give up, however, and embarked on new disciplines : swimming (where he once again champion), racing and rallying in SSV. This sport is similar to motocross except that the vehicle is on 4 wheels.

Axel Allétru shares his story through keynotes based on his resilience to paraplegia and his career asa high-level athlete. This period of his existence allows him to reveal to you the teachings that life has given him. These teachings as well as his enthusiasm front of the various difficulties encountered, gave him the ability to accept and overcome the difficulties of life – resilience.

His keynotes are intended to be motivating, thanks to the strong messages that Axel wishes to convey. His sporting successes, his champion mentality as well as his rich learning path serve as a basis for giving the motivation and the necessary inspiration to people who discover his story. The goal is simple, share a life story with you, so that it resonates with your people. Everyone must find their own path and the appropriate personal resources to move forward.

Resilience, ambition and positivity are the key words of Axel’s conferences. Thanks to his fighting spirit, his motivation and his unfailing optimism, he was able to make the most of his life experience to transmit today a message with a very strong positive impact!

As a speaker and high level athlete, Axel delivers his life journey with authenticity and simplicity, he shares the different lessons that life has taught him. He talks about his accident that left him paraplegic and the actions he had to take at his level to bounce back and therefore walk again against all odds, rising from his ashes as a phoenix.

Axel also shares the concrete keys and methods that helped him to train hard, rebuild and triumph once again in a sport that was completely unknown to him. One story, different lives, but the main message is the same: Behind the impossible, there is always a possible.

Motivate and revitalize your employees

A difficult year for the company ? A decrease in motivation ? New challenges to come ? Re-energize your teams and get them motivated.

Find out how Axel was able to find his motivation to walk again and bounce back by practicing disabled swimming and becoming 12 times France champion and record holder on several occasions.

We often hear negative things about disability. In business or in life, we no longer know how to experience it or manage it around us. Disability can above all be a driver of performance and cohesion within a family as well as within a company.

Find out how Axel has transformed his disability into strength, and his history a way to unite people around him.

Behind every high level athlete there is a team, the same goes for the entrepreneur

In sport as in business, , reaching the top level is the result of individual and collective performance. Like a professional athlete, a business leader must know how to surround himself himself with a strong and united team.

Find out how Axel was able to reach the top level in different sports thanks to the team he built around the project.