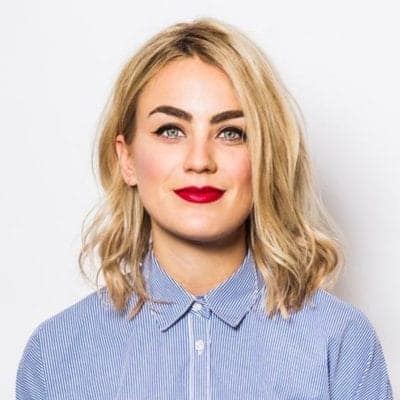 "Georgie was an ideal speaker for our students - relaxed, down to earth, funny and crammed a lot of practical insights into her talk."

"Excellent - couldn't have asked for a more accommodating and professional MC for our event."

She writes about tech for a range of publications including Marie Claire, The Mirror, Metro & Tech City News and has spoken on the subject for the likes of ITV, Channel 4 and the BBC.

Georgie is ITV’s ‘Weekend’ resident technology expert, talking Aled Jones through the latest gadgets and gizmos, whilst also working alongside the production team to help source and create the feature. She also regularly appears on Channel 5’s ‘The Saturday Show’ commenting on the latest tech stories to hit the headlines.

Radio work includes being a regular guest on BBC’S Tech Tent, commenting on breaking tech stories for Radio 2 and talking through the morning papers on talkSPORTS Breakfast Show.

Other presenting work includes being Carphone Warehouse’s YouTube presenter (she loves getting her hands on all the latest smartphones) and delivering Tech City New’s weekly video roundup, which sees her interview some of the most exciting start-ups from Silicon Roundabout. She’s also presented alongside Matthew Wright on Channel 5’s ‘The Wright Stuff’ and has worked on-camera with a range of tech companies including Sony, Acer, EE, Asus, HP and Mobile World Congress.

An experienced moderator, facilitator and host, Georgie has worked with corporate clients including Intel, Adobe, IFA, Retail Week Live. Bringing her expertise in media, digital trends and online culture she easily establishes rapport with audiences and panels a like. She also delivers keynotes with her topics revolving around employing and motivating Generation Z and women in technology.

Georgie is passionate about getting more girls into coding and works alongside two charities (STEMettes, Baytree Centre) to help encourage 11-14 year-olds to study STEM subjects at GCSE & beyond. As a tech journalist her mission is to do away with the male skewed angle that tech is often portrayed in.

She graduated from Kings College London with a First in English Literature, has a Diploma in Radio Production and last summer learned how to code with the ‘Code First: Girls’ programme. Georgie has also completed the London Marathon and Tough Mudder for charity.

Business needs millennials more than ever to cope with the ever-quickening pace of change – but what values, behaviour and ambitions do young people of today have? In this keynote Georgie Barrat, a Generation Y tech journalist, will give you engaging and informative insights.

Success by Design: Building and Networking with your Personal Brand Online

Having a personal online presence is more important than ever when it comes to generating business and developing your career. In this keynote tech journalist Georgie Barrat explains how to optimise search results and network effectively with your own brand online.

How can companies attract, retain and nurture female tech talent? Tech journalist Georgie Barrat explores why women make up only 17% of the industry and offers some practical tips on how businesses can address this imbalance.

How can you use digital to grow your business online, improve productivity and better understand your customers? How can your company successfully implement social media? In this keynote tech journalist Georgie Barrat talks through practical tips and relevant trends to help your business thrive.