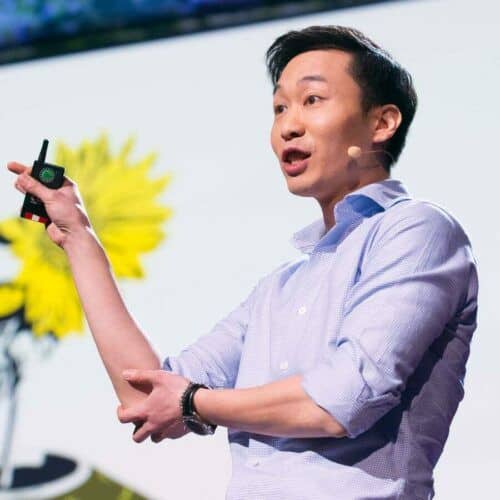 Jinsop Lee is an innovative industrial designer who believes that the best design appeals to all five senses. He has worked as a design consultant for large companies and taught industrial design at Korea’s top design university. Now he has his own design company and is working on a series of videos about industrial design.

"As a designer this guy has given me so much to think about."

"With creativity and enthusiasm, Jinsop Lee offers a new approach to problem-solving. By focusing on consumer needs first, his method delivers solutions that engage customers' hearts, minds and souls. Innovative, fun and effective!"

"He is a company co-founder who I can sincerely trust, a mentor who I turn my head to when seeking advice, and one of the greatest minds that I have ever known. I earnestly recommend him, and have no doubt that whoever decides to work with him will soon realise what I mean by this."

There is a great energy and sense of fun about everything Jinsop Lee does – he is “innovative, fun and effective.”

Jinsop Lee says his design background began when he was 5 years old and his mother refused to buy him a Star Wars X-wing fighter – so he designed his own out of Lego.

After a childhood spent living and absorbing cultures all over the world he started his career as what he called “a suit-wearing design consultant.” He spent his time designing products and creating strategies for large companies. A compulsory 2 year stint in the Korean Army followed, before taking up a post as an associate professor of industrial design at Kyung-Il University – the top design university in Korea. He has founded his own design firm Uncle Oswald Is My Hero, which produces clever iPod speakers from old telephone handsets. He has incorporated his innovative ideas for improving design into imaginative keynote speeches and was invited to address a TED conference in Long Beach on his ideas for multi-sensory design in 2013 after winning a Global Talent Search competition. As well as his speaking engagements he is working on a series of short videos about industrial design.