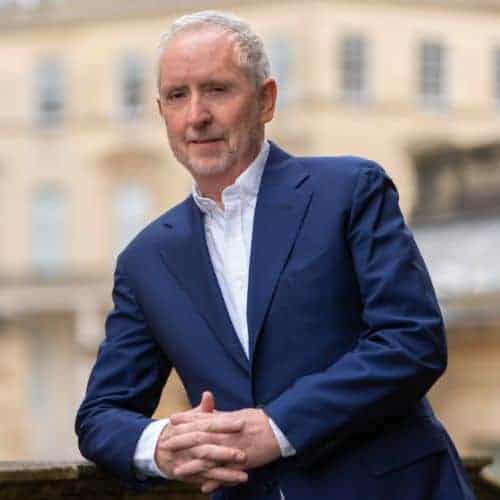 Martin McCourt has worked for some of the biggest consumer brands for over 40 years. As CEO of Dyson for 15 years, he led the business from niche vacuum cleaner maker to a global brand with an extensive product line.

"A quick note to say thank you for speaking at our event this week. The customer feedback has been fantastic and your session was excellent, a fitting end to the day, allowing delegates to leave on a real high. Loved the balloon story and your faith in the young entering the workforce - I totally agree."

"NY colleague Dominic turner asked me to thank you for presenting at the NatWest Annual Tech Conference on Wednesday and he tells me that your talk was exceptionally interesting. Your message that ideas should come from the next generation of employees very much resonated with him."

"You were absolutely fantastic – a tour de force! Love everything that we do together and I’m not surprised that you have had the feedback. If it was Strictly it would have been a 10! Thank you for being such a pivotal part of the morning and looking forward to finding further opportunities to work together."

"Thank you so much for your inspiring speech last night, the feedback from our guests has been so positive. I loved your comments about embracing young people and we are actually looking at a buddy system whereby CEOs and NEDs could have a young person to buddy then on new technology."

"Feedback from last night and your speech in particular has been excellent."

"Your speech at the dinner was very well received and hit the mark perfectly. There have been many compliments about your “performance” and how well your topics/themes connected with the audience. You brought a well-balanced message covering technology, creativity and commerciality, all of which was balanced with just the right amount of humour. Your closing remarks were right on message, challenging us all to think about the younger generation and how we attract, nurture and retain them within our organisations."

"Martin, just wanted to say how much I enjoyed your talk last night. Very inspiring and thought provoking. Everyone talking about it today."

"Your contribution to our conference was superb. We were already having an excellent day and your presentation was exactly what I hoped it would be and more. It was a perfect round off to proceedings and I have had multiple comments on your presentation as informative, enjoyable and thought provoking. We are often accused of being an inward looking industry so being shaken into novel and important alternative views and suggested actions was just what the doctor ordered. And then given in such a unique and entertaining style was the icing on the cake. I am indebted to you for your contribution and hope that our paths cross again in the future."

"I just wanted to say thank you! Yesterday’s opening was perfect and I am receiving endless compliments on your session both for the content and for your ability to connect with the group so easily (as I knew you would). Always an inspirational leader and communicator."

Martin McCourt has spent over 40 years working at the heart of British-based manufacturing, design and marketing for quality brands such as Dyson, Mars, Duracell, Toshiba and Pelikan.

Martin was the CEO of Dyson for 15 years, the ideas to market-leading consumer products maker. As CEO, he devised and implemented a strategy that transformed the company from a single product, single market producer into one where 80% of the business came from over 60 markets around the world.  In that time he increased UK skilled jobs, grew profits to over £300m and enabled James Dyson to keep on inventing.

In 2011 Dyson hit £1 bn revenue for the first time.  Martin was directly responsible for the establishment of Dyson subsidiaries in the USA, Japan, Switzerland, Austria and Germany. In total he took Dyson into over 60 markets, achieving market leadership in the majority including the USA.

In 2010 Martin was named UK Business Leader of the Year.

In August 2021 Martin was appointed as Chairman of COMPO which is is a leading European producer and distributer of gardening soil, fertiliser, lawn seed and products for plant protection with a focus on organic ingredients.

In December 2020 Martin was appointed as Chairman of Putre Electric. The business is focused on the design and development of high performance, zero emission, personal electric transportation.

In November 2020 Martin joined the Board of Tharsus as a Non Executive Director. Tharsus design and manufacture Strategic Machines that solve tough automation problems for Businesses, driving performance and productivity.

In January 2019 Martin joined the Board of Weber as a Non Executive Director and strategic adviser. Based in Chicago, Weber is the most recognized name in the world for barbecue grills and has the most comprehensive range of products and services in the industry.

In October 2018 Martin was appointed as Chairman to FreeFlow Technologies, a dynamic UK start-up, developing a lightweight compact, high performance e-bike drive system that is backed by Williams Advanced Engineering and Foresight PE.

Past Chair and Non-Executive Positions

Martin was the Chairman of Lightfoot from November 2018 until October 2021. Described as the ‘Fitbit for cars’, Lightfoot cuts fuel emissions and saves money for drivers every time they drive.

Martin was the Chairman of The Learning Curve Group from  January 2016 until its successful exit in February 2020. Learning Curve is an organization that provides vocational

education and training programmes to a wide range of learners and employers.

From  2014 until 2020 he was a Non-Executive Director and investor for Headbox, a web based platform which enables the sharing of inspiring places for people to have meetings.

Martin was on the Board of Your Life.  A recently completed, three-year, campaign to ensure young adults in the UK have the maths and science skills needed to succeed in the current competitive global economy. 2015-2017

He was formerly Chairman of Glen Dimplex, a leading international group that is the world’s largest manufacturer of electrical heating as well as holding significant global market positions in domestic appliances, cooling, ventilation and renewable energy solutions. 2016-2019

Chairman of D.O.R.C a prominent provider of innovative instruments and equipment for ophthalmic surgery. 2013-2015

Have the right people, tap into their thinking and instincts, encourage and liberate their idea flow. What we do that achieves this and what we do that can stifle creativity

How smart companies are stealing a march on their rivals by engaging with millennial consumers using platform communication and social media. The importance of keeping pace with changing consumer attitudes and values, thinking outside the box

Enjoying the journey, deliberate disruption and the consequences. Being ready to meet adversity and to turn it into opportunity. Making your business look good, often at the expense of others. Helping competition score own goals

Transferring all manufacturing, UK based, to Southeast Asia. The role that technology played in supporting an effective transfer. Doing the right thing even if it is the hardest thing (widespread criticism at Dyson decision).

The role that invention and entrepreneurship plays in fuelling economic growth

More bumps in the road

The Dyson washing machine was not a commercial success. Airblade, Air Multiplier and Vacuum cleaners were. Importance of how we react when it goes wrong…

How hard we need to work to retain our identity. Being David and the advantages over Goliath. How to make sure that scaling up does not bring about a loss of identity