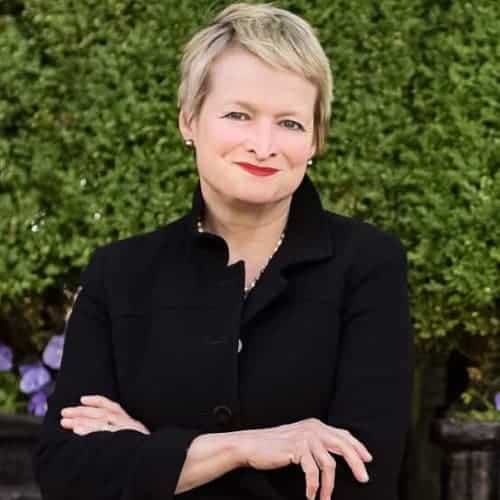 Named the world’s #2 management thinker by Thinkers50 2021, Rita Gunther McGrath is a world-renowned thought leader and a professor at Columbia Business School, where she directs the popular Leading Strategic Growth and Change program. She is widely recognized as a premiere expert on leading innovation and growth during times of uncertainty.

"Rita's keen insights into strategy building - and avoiding creative destruction - were a perfect fit with our conference focus."

"The fact that we ran over and had to forcibly eject our guests is reflective of how engaging the conversation was at the event. I can't thank you enough."

"Rita did a great job of getting her message across in 45 minutes. She speakers from her heart and does not use notes. It was no surprise that Rita's presentation ranked highest of all external speakers."

Leading Hotels of the World

"An exceptional instructor, Rita has the ability to take complex topics and make them understandable and applicable."

She is widely recognized as a premier expert on leading innovation and growth during times of uncertainty. Rita has received the #1 achievement award for strategy from the prestigious Thinkers50 and has been consistently named one of the world’s Top 10 management thinkers in its bi-annual ranking. As a consultant to CEOs, her work has had a lasting impact on the strategy and growth programs of Fortune 500 companies worldwide.

Rita McGrath appears regularly on television and radio and is often cited in the press, including The Wall Street Journal, New York Times, Financial Times, and Businessweek, Inc. She maintains an active blog and is featured as a discussion leader at Harvard Business Online.

Rita is the author of the best-selling The End of Competitive Advantage (Harvard Business Review Press, 2013). Her new book is Seeing Around Corners: How to Spot Inflection Points in Business Before They Happen (Houghton Mifflin Harcourt, 2019). She has written three other books, including Discovery Driven Growth, cited by Clayton Christensen as creating one of the most important management ideas ever developed. She is a highly sought-after speaker at exclusive corporate events around the globe, such as the Global Peter Drucker Forum.

Rita joined the faculty of Columbia Business School in 1993. Prior to life in academia, she was an IT director, worked in the political arena, and founded two startups. Her Ph.D. is from the Wharton School, University of Pennsylvania. She teaches in Columbia’s top-ranked Executive Education programs, and is the Faculty Director for the Columbia Executive Education program Leading Strategic Growth and Change.

We’ve all seen the story play out. A company experiences phenomenal success, their CEO makes the cover of notable business publications, and business writers use them as examples for the rest of us. Then, somehow, the firm gets into trouble. Competitors capture their customers, margins shrink, investors grumble, activists turn up, the CEO, or a succession of CEOs, are shown the door, and, eventually the company disappears or becomes irrelevant. A root cause, McGrath argues, is the pervasive belief that a competitive advantage, once established, is enduring. This belief leads to complacency, inward focus, loss of customer engagement and a stifling of innovation.  Instead, smart strategists leave old assumptions at the door and pursue opportunities to establish and exploit transient advantages.

Most organizations suffer from a pervasive anti-failure bias.  When things don’t work out as planned, those seen as responsible are branded as having failed.  Here’s the problem: in fundamentally unpredictable environments, it is a fool’s game to make bold predictions, because you simply don’t have the information you need.  Getting the information when you really don’t know requires some kind of experimentation.  Some experiments don’t work out, but that doesn’t mean they failed.  It simply means that particular path forward isn’t going to work. Failure is essential if your organization is to take the controlled risks to engage in the innovations crucial to effective competition.

You have what you think is a great idea to pursue an attractive new opportunity. Before you can make progress, though, you are hit with a barrage of questions that you have no way of answering. “What will the ROI of this venture be?”; “how long will it take to launch”; “how will it affect our existing product lines?”. If you’re like people in many organizations, you will dutifully put together a conventional business plan, with details about the idea, spreadsheets that project what the financials could look like and GANTT or similar charts laying out the project timeline. And even as you are doing all this, you know in your heart of hearts that this is more a quantification of fantasy than it is likely to bring your idea to life. There is a better way.

In the seminal work that formed the basis for the Lean Startup movement, McGrath describes how to create a plan for a new venture that gets you to early answers fast, by focusing on the most critical assumptions that you need to convert to facts.  It’s disciplined, but it’s a discipline that comes straight out of the entrepreneurial mindset.

Snow Melts From The Edges: How To See Around Corners

Companies that are blindsided by changes in their environment or disruptions in their competitive space have one thing in common: Their executives and decision-makers somehow got disconnected from the “edges” of the organization—where small changes start brewing before their implications are obvious to everybody. So too, when a big opportunity is missed or dismissed. Why, for instance, did Microsoft initially miss something like five major shifts in underlying technology as it tried to defend its Windows franchise, and why is it regaining relevance now?