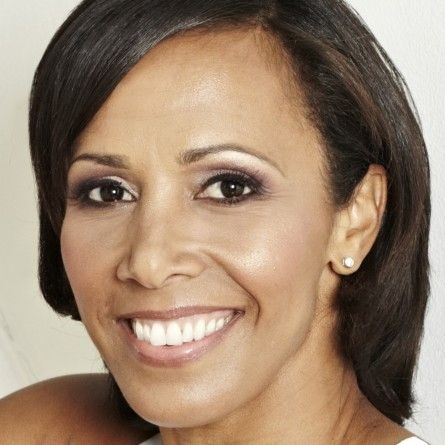 One of Britain’s most successful and celebrated female athletes, Kelly Holmes won Gold in both the 800 and 1500 metre event at the 2004 Athens Olympic Games. Having entered sport after a successful career in the army, her dedication and drive were key to her Olympic victory, making her a role model to sportspeople of all ages and abilities and earning her a Damehood in the 2005 New Year’s Honours List. Now retired, she is involved with a number of charities and is a sought after speaker and awards host.

"Testimonial for Black, White & Gold: My Autobiography: 'An honest account of Kelly's emotional and physical rollercoaster to glory."

"Testimonial for Black, White & Gold: My Autobiography: Readers will enjoy the access into her childhood and her years in the Army."

Humorous, approachable and eloquent, Dame Kelly Holmes is a charming and effortless speaker who explains how techniques for success on the tracks can be applied to all areas of life.

After winning numerous medals in European, Commonwealth and World championship competitions, Kelly Holmes achieved her dream of Olympic victory in 2004, winning Gold in both the 800m and 1500m track running events. Having reached, and exceeded, her goal of winning an Olympic competition, Holmes then retired and has since been appointed President of Commonwealth Games England, founded a charity (DKH Legacy Trust) to help young people succeed in life and in sport, and a company (Double Gold Enterprises Ltd) to provide services to the fitness and health industries. In 2005, Holmes received a Damehood in recognition of her achievements and dedication.

Now a household name due to her sporting success, Holmes began her career in the army. Always a keen sportswoman, she continued to train during her years of service, even becoming the British Armys judo champion. It was her service within the armed forces that earned her an MBE, her characteristic tenacity, dedication and ability to self-motivate serving her well in all of her roles. Deciding to train for professional sport after watching the 1992 Olympics, Holmes went from strength to strength, winning Gold, Silver and Bronze medals at numerous competitions.

Despite this success, Holmes often felt as though her full potential had yet to be reached and she was often held back by injury. Undaunted by such matters, she continued to train in earnest prior to the 2004 Games in Athens. It is this spirit that makes Dame Kelly Holmes such an inspirational speaker. She has worked with numerous organisations, providing others with the know-how they need in order to strive for success and to gain and maintain healthy levels of self-belief.

Have a goal and believe in your abilities

Helping others to achieve their goals

Peaking at the Age of 34