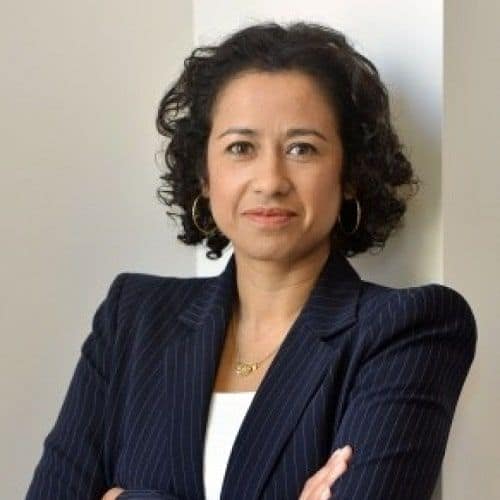 British freelance journalist, writer and broadcaster at the BBC

Samira Ahmed is an award winning journalist and broadcaster, and a visiting professor of Journalism at Kingston University with a special focus on culture, politics and social change.

"It was a real pleasure to work with Samira. We've received lots of very positive comments from the client and delegates. Samira brought her experience and knowledge of the subject to our planning and helped shaped the discussions, which we were grateful for."

"Samira moderated fantastically well which meant the relatively small size of the group didn't negatively affect the impact of the event. I think her relaxed yet directive style meant people felt comfortable to contribute and she was very good at drawing out key points and managing the debate to schedule."

"The event was successful, thank you and Samira was fantastic. We really threw her into it and she handled it all admirably. She is a lovely lady and we all enjoyed working with her."

"We were impressed with the seamless way in which she was able to pull together the disparate parts of our event; her knowledge on the issue at hand; the way in which she engaged with and welcomed guests; her assertive yet friendly style when chairing the panel discussion; and the genuineness of her approach - this was clearly a subject she was personally interested in."

"You played a blinder (as we say) with the debate. It was far and away the best one we have had in all four events."

"Speech Day went really well, and Samira was a perfect choice as speaker - inspirational yet irreverent. She packed so many anecdotes and so much wisdom into her ten minutes, and definitely left the audience wanting more, which is quite an achievement after they've been sat in a stifling hot marquee for over an hour!"

"Thank you for the wonderful moderating of the afternoon, you held the content together wonderfully.. in fact we were all saying how much we all wanted to hear more from you!"

"Thank you so much for last night Samira - you were just brilliant! We've had lots of positive comments here today and you really did make a huge contribution to making the night such a success. We thoroughly appreciate all the obvious time and effort you put into the role - it made life so much easier to know the hosting was in such good hands."

Business in the Community Awards

Samira presents the weekly programme Newswatch on BBC One and is one of the main presenters of the BBC Radio 4 Arts programme Front Row.

She also makes regular documentaries. They include Laura Ingalls’ America, John Ruskin’s Eurythmic Girls, I Dressed Ziggy Stardust, HG Wells and the H Bomb, Riding Into Town (about her love of Westerns) and The Fundamentalist Queen (about the life of Oliver Cromwell’s wife). Samira writes regularly on culture and politics in newspapers and magazine including The Guardian, Radio Times, The New Statesman, The Mail on Sunday and The New Humanist. She presents television coverage of the Proms on BBC4 and previously presented two series of the BBC1 ethics discussion programme, Sunday Morning Live. Her other BBC Radio credits include Radio 3’s Free Thinking, Radio 4’s Something Understood, PM, The World Tonight, Profile and Sunday. She was runner up for interview of the year at the Sandford St Martin awards 2016 for her Heart and Soul interview with Terry Waite.

Samira was previously a presenter and correspondent at Channel 4 News, where she won the Stonewall Broadcast of the Year award for her investigation into rape in South Africa and she made the Channel 4 documentary series “Islam Unveiled” about the status of Muslim women around the world.

She has been a reporter on Radio 4’s Today Programme and Newsnight, where she uncovered a major charity scandal, and was one of the first journalists to investigate the emergence of radical Islam at British universities. She also covered the OJ Simpson case as BBC’s Los Angeles Correspondent.

Her natural competitive streak found an outlet when she won Celebrity Mastermind in 2010.

Samira is a highly sought after conference chair, interviewer and professional moderator for cultural discussions at many major institutions including the British Film Institute, The British Museum, The Science Museum group and Royal Shakespeare Company. She’s also done events for the United Nations, and several UK government departments, including The Home Office, the Department for International Development and the Cabinet Office. She presented the Civil Service awards for 5 years.

She gives school talks and lectures regularly on journalism at a number of universities and hosts an annual student Question Time for 500 sixth formers at St Albans Cathedral.