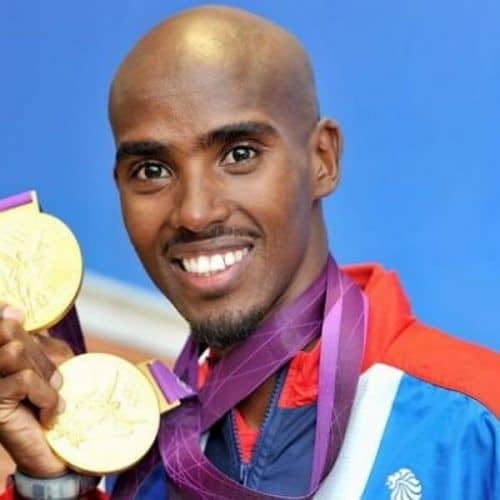 Most successful and decorated athlete in British athletics history

Sir Mo Farah CBE, is the most successful athlete in British athletics history by winning two gold medals at the London 2012 Olympic Games in the 10,000m and 5,000m events.

He became the first ever athlete to achieve the historic double victory on home ground. His first major breakthrough was in 2006 when he won a silver medal in the European Championships 5000m event. In 2010, he later became Britain’s first-ever men’s European gold medal winner at 10,000m.

Mo began running at school where his natural talent was immediately recognised which led him to a very successful junior career, when in 2001 he won the European Junior 5000m title. His first major breakthrough came in 2006 when he won a silver medal in the European Championships 5000m event.

Olympic success continued in 2016, when he went on to win double gold at the Rio 2016 Olympic Games. During the year he then won the Great North Run for a record breaking third time. As a British athlete he has won awards including the European Athlete of the Year and the British Athletics Writers Association, British Athlete of the Year more times than any other athlete.

In 2013 he was appointed CBE and Knight Bachelor in the 2017 New Year Honours.