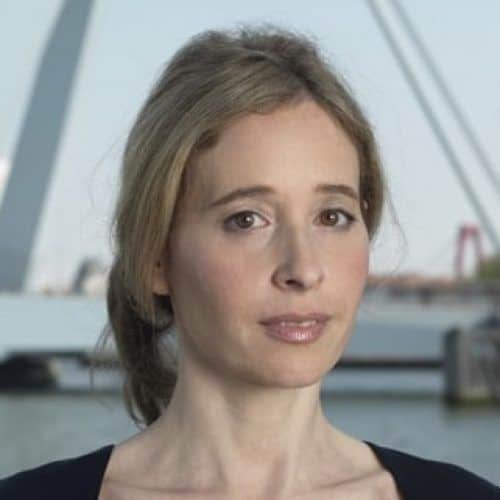 One of the world’s most influential thinkers

Noreena Hertz is a renowned thought leader with an impressive track record in predicting global trends. Her best-selling books, The Silent Takeover, IOU: The Debt Threat and Eyes Wide Open, are published in 23 countries. She advises a select group of the world’s leading business and political figures on strategy, economic and geopolitical risk, digital transformation, Generation K and millennials and sits on the board of Warner Music Group.

"Most highly rated speaker by our clients in 20 years."

"Thank you for an excellent, lucid and fresh talk at the WIRED event. You were a hit."

"Thank you for your outstanding opening address... Your intervention and the ensuing 'Questions and Answers' set the appropriate tone for the day ... the executives present found your contribution both challenging and stimulating. Your description of the challenges that we face as an iconic global company set the scene and created an atmosphere ripe for the harvesting of new ideas... many thanks for your willingness to share your ideas with us."

"Having heard you speak yesterday there is no doubt in anyone's mind that you are the 'shining light of your generation'. Your knowledge and erudite speaking around such a relevant and pertinent topic set the tone for the whole event. The feedback has been tremendous, thank you so much for making it such a success."

"Noreena was excellent at our event yesterday evening. I've received many comments from employees and colleagues about how insightful she was - drawing from examples that really helped stretch our employees' thinking and challenge what we perceive doing the right thing to mean...definitely delighted with our choice."

"Thank you for doing a fantastic job. The feedback on you has been all positive. We so much appreciated how much time you put into understanding who we are and coming prepared. Both the session and breakout were wonderful and I am not obligated to say that, I promise."

"Professor Hertz' contribution touched all the participants. Professor Hertz makes every single person feel his or her responsibility towards this world and give everybody the energy and belief they can contribute to a more sustainable future. We've received many very positive responses on her contribution and it has been a pleasure and honour working with her."

"I very much enjoyed your speech today, which was the highlight of the CFO conference. Really inspirational."

Her thinking served as the inspiration for Bono’s Product (Red). She has featured as the Cover Story of Newsweek.

Noreena Hertz is ITV News Economics Editor. An influential economist on the international stage whose career has spanned Europe, the United States, Russia, the Middle East and Africa, she has advised some of the biggest organisations and most senior figures in the world on strategy, decision-making and data, global economic and geopolitical trends, millennials/Generations K, Y and Z, and corporate social responsibility.

Her best-selling books, “Eyes Wide Open: How to Make Smart Decisions in a Confusing World” (2013), “IOU: The Debt Threat” (2004), and “The Silent Takeover” (2003), are examples of her own prescient thinking and have been published in 23 countries. Most recently she has been exploring the world of the post-millennials, today’s teenagers, who she has coined “Generation K”, with articles published in the UK, US, Europe and China.

Noreena’s new book, The Lonely Century, has been a great success. The book focuses on insight and predictions for life beyond the pandemic and how socially, economically, politically and technologically it will prevail. It has been on the bestseller list in Korea, and was chosen as ‘Most Important Book of 2021’ by the Non-Obvious Book Awards as well as El Mundo’s ‘Best Books of 2021’. It has already been published in at least 15 different countries and languages.

Noreena has served as a member of Citigroup’s Politics and Economics Global Advisory Board between 2007-08, and as a member of the Advisory Group steering McKinsey CEO Dominic Barton’s Inclusive Capitalism Taskforce between 2012 and 2013. From 2014-16 she served on the Board of Warner Music Group.

Noreena’s insights are much sought after on leading current affairs/politics/economics television and radio programmes, and she frequently appears on such flagship programmes as Newsnight and Question Time. She has been interviewed on shows such as the US’s Charlie Rose This Morning and Sky’s Hard Talk, as well as equivalent programmes in Europe and Asia. , has hosted her own show on Sirius XM, the United States’ biggest radio network with 64 million listeners, and served as ITV News’ Economics Editor where she led ITV’s economics coverage through a fascinating, fast-paced period that included the Referendum and its aftermath, the invoking of Article 50 and a General Election.

Over the past year, Noreena has delivered keynote speeches and moderated numerous events on topics ranging from A.I., to Brexit, to geopolitical risks, for organisations including the World Economic Forum at Davos, and select corporate clients.

With dark clouds hovering over the economy, consumers starting to tighten their belts, and the battle for talent ever more fierce, it’s more essential than ever for business leaders to understand the new context they are operating in, how it’s likely to evolve, and the strategies they will need to triumph in it.

The lonely century: how to reconnect

The Five Forces that are Transforming our World

What is the world going to look like in the next two to three years? What are the key challenges and opportunities business leaders will face?

In this landmark keynote speech, Professor Noreena Hertz outlines the key forces – geopolitical, economic, societal, technological, that she believes are transforming the world and should be on every business leader’s radar.

The Robots are Coming: Thriving in an age of Digital Disruption, Artificial Intelligence, and Cyber Hacking

How to Make Smart Decisions in a Complex World

Through her unique multi-disciplinary integrated approach – combining economic analysis with insights from psychology, neuroscience, anthropology and sociology, Professor Noreena Hertz seeks to make us smarter decision makers, better able to figure out what to do in a complex world. In this speech, Professor Hertz identifies thinking traps we all fall into that we are not aware of, but need to be, and comes up with exciting active thinking strategies for her audiences to adopt so as to be able to make smarter decisions in their professional and personal lives.

From Brexit to Trump: Managing the New Geopolitical and Economic Landscape

Generation K: How to Future-Proof Your Organisation for the Next Generation of 15-25-year-olds

You may know all about millennials by now. But what about what comes next? Based on her cutting-edge proprietary research on 15-25-year-olds, Noreena Hertz shares deep insights into who this generation is, what they care about, how they behave, what they want, and how they consume. Shaped not only by technology but also the worst recession in decades, as well as a world of heightened geopolitical threat, this generation is manifestly different from those that came before.

How to come together in a world that’s pulling apart

How to make smart decisions in the post-covid 19 world

What the next three years will look like: the key economic, geopolitical, technological and societal forces that will shape our near term future

The loneliness economy: how recent events will shape consumer behaviour over the next three years

Generation k: how to manage, retain and inspire your youngest cadre of employees and consumers