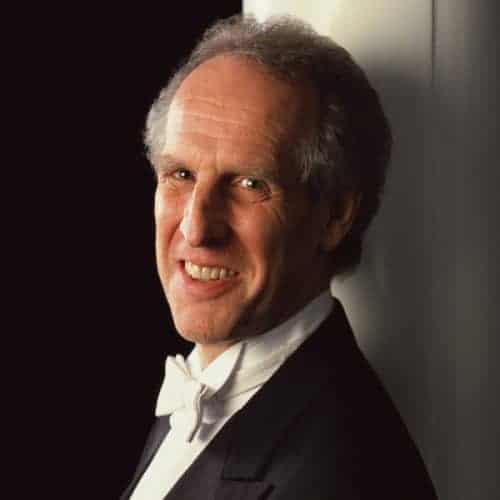 Benjamin Zander’s presentation as a keynote speaker takes an audience on a journey that offers a startling new perspective on leadership. Through stories, music, and concepts it causes a radical shift in perception. This is not a speech, it is an experience!

"If you want to liberate your soul, listen to Zander's Mahler. If you want to take your leadership skills to the next level, study the Art of Possibility with the Zanders. In his presentation Ben explodes traditional leadership thinking and takes leadership out of the closet. He blows the door WITH its hinges off that closet, and you can never go back after working with Ben. His leadership view is unconventional, irreverent and bold. Its impact is without boundaries. I have seen Ben Zander's teaching transform entire teams through Possibility in ways that are nothing short of magical with results that are nothing short of exemplary. He is a catalyst for Excellence."

"Ben Zander's presentation was, literally, the most important contribution I've ever heard at a conference. Not only the music and the wit and the sheer fun, but the profound insights and wisdom. A moving and memorable occasion for all present. This was a breakthrough event in corporate creativity."

Zander began his career in music as a boy. His father was a lawyer by trade but was also an excellent musician; he taught his son to play the cello and to conduct at a very young age, and his talent soon became apparent. Throughout his childhood, Zander studied under some of music’s most gifted artists, including the composer Benjamin Britten and Gaspar Cassado, the Spanish cellist. Zander studied English Literature at University College London, whilst still performing regularly as a professional cellist and helping teach at the Yehudi Menuhin School (a specialist music school).

He was awarded a Harkness Commonwealth Fellowship and began postgraduate studies at Harvard University and Brandeis University. After completing his studies, he began working for the New England Conservatory (NEC) in Boston, Massachusetts, teaching his (now world renowned) interpretation class and conducting the Orchestras.

His work became internationally recognised and Zander soon began working with the Boston Philharmonic Orchestra, which was founded in 1979. Before a concert is performed, the concept and organisation of the music is discussed, enabling the NECs students and other audience members to better understand the nuances of the pieces to be performed. He also works extensively with the NECs Youth Orchestra.

World renowned for his work with The Boston Philharmonic Orchestra, Benjamin Zander is one of the most talented and celebrated conductors of our time. Working as a guest conductor for orchestras all over the world, his career has spanned several decades. In 2010, his recording of Bruckners 5th Symphony for Telarc was nominated for a Grammy Award. Determined to share the music he is so passionate about with everyone, Zander has also released CDs of the Mahler symphonies he has performed with the London Philharmonia, on which he has recorded his own explanations of the work; an ideal introduction for those unfamiliar with the composer.

Now as well regarded for his work as a speaker as for his teaching and conducting, Zander has been invited to share his knowledge and experience with organisations the world over. Past clients have included NASA, the US Army, KPMG, IBM and Shell. He has spoken at the TEDx Conference in 2009 and has provided the Keynote address at the World Economic Forum on three occasions. He has featured in programmes by the BBC and in 60 Minutes on CBS.

The Art of Possibility, which Zander co-wrote with his wife Rosamund Stone Zander has been translated into fifteen languages.

Praise for The Art of Possibility: Transforming Professional and Personal Life

“The passionate energy permeating The Art of Possibility is a true force for every reader for self-development and life fulfilment.” – Klaus Schwab, founder and president of the World Economic Forum

“The Zanders’ suggestions constitute sound, practical advice that has much in common with Zen concepts of holism, balance and grace.” – Publishers Weekly

“In the presence of either Zander, one’s spirit soars. Now they reveal their secrets in a deeply satisfying book. I guarantee you’ll be inspired.” – Gail Sheehy, Author

Throughout his career in music, Benjamin Zander has been known as an inspirational figure. Almost as well known for his pre-performance talks as he is for his interpretation of Beethoven and Mahler, it is not surprising that he has become a sought after speaker. An expert on leadership, teamwork and creativity, he effortlessly applies his knowledge about the workings of orchestral groups to workplace scenarios, helping groups work together to achieve shared goals.

Beyond Hierarchy - bringing vitality to organisations

Developing a new paradigm for organisations